'Ashtavinayak of Theur' popularly also known as the 'Chintamani temple of Theur' is a Ganesh temple located in Theur, Maharashtra.

Being one of the important incarnations of Lord Ganesh and having strong religious beliefs of people connected with it, the temple is a peace provider to the mind of the visitor.

Theur is a small township located not far from Pune. It is known for the Vinayaka (a form of Ganesha / Ganapati) temple known as Shree Chintamani Vinayaka Temple.

In the Ashtavinayak Temple Pilgrimage of Maharashtra, Theur Chintamani is said to be the fifth temple to be visited. Chintamani Ganesh is the 'God who brings peace of Mind'.

There is a central shrine dedicated to Lord Ganesh along with numerous smaller shrines dedicated to Lord Shiva, Lord Vishnu and his wife Goddess Laxmi, Lord Hanuman and more in the same premises. It also contains a wooden Sabha-Mandapa which was built by Madhavrao Peshwa in the 18th century. The temple also holds a black stone water fountain in it.

One of the very interesting features of the Idol of Lord Ganesh here is that it is self-emanated and is facing eastward. The idol is sitting in a cross-legged position. Precious diamonds take their place in his eyes. Another intriguing fact is that not only the deity but the place itself has great significance. Theur is located on the  bank of river Mula-Mutha.

The great Peshwa Madhavrao I, spent his last days at this place. His wife Ramabai Peshwe entered into the ritual fire alive as a part of ritual called ‘Sati’, after the death of Madhavrao Peshwa. Her memorial is located not far from this temple on the bank of the river

Located in the village of Theur, taluka Haveli, 24 KM away from Pune District in Maharashtra.

The annual rainfall in the region is around 763 mm.

While at the temple, after seeing the main shrine, one should definitely pay homage to:

If a person is visiting during the time of Ganesh Chaturthi, a huge event and amazing fair is organized for visitors to enjoy.

One can visit a number of tourist destinations while paying a visit to the temple.

Authentic Maharashtrian Cuisine can be found in restaurants present nearby. 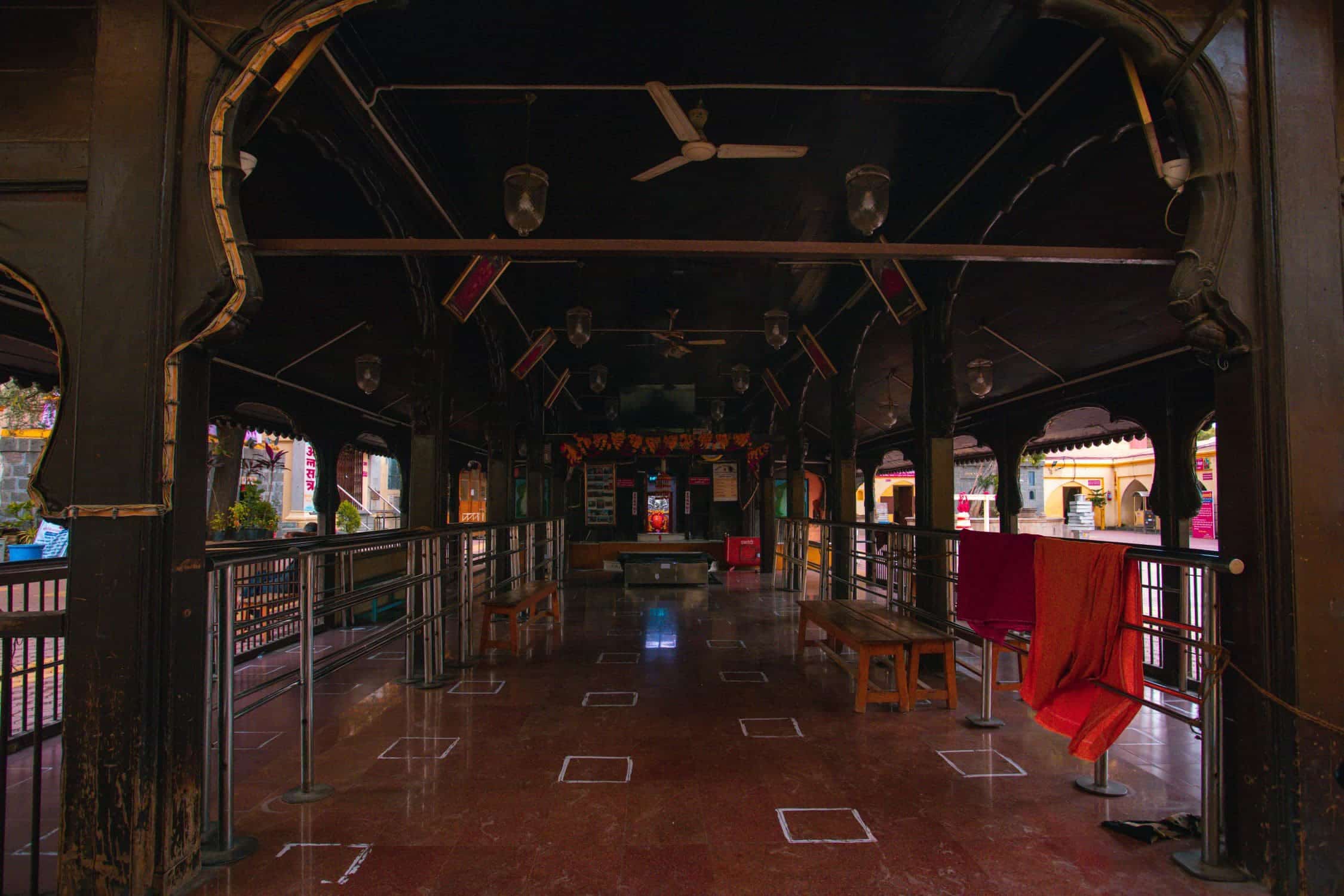 'Ashtavinayak of Theur' popularly also known as the 'Chintamani temple of Theur' is a Ganesh temple located in Theur, Maharashtra. Being one of the important incarnations of Lord Ganesh and having strong religious beliefs of people connected with it, the temple is a peace provider to the mind of the visitor. 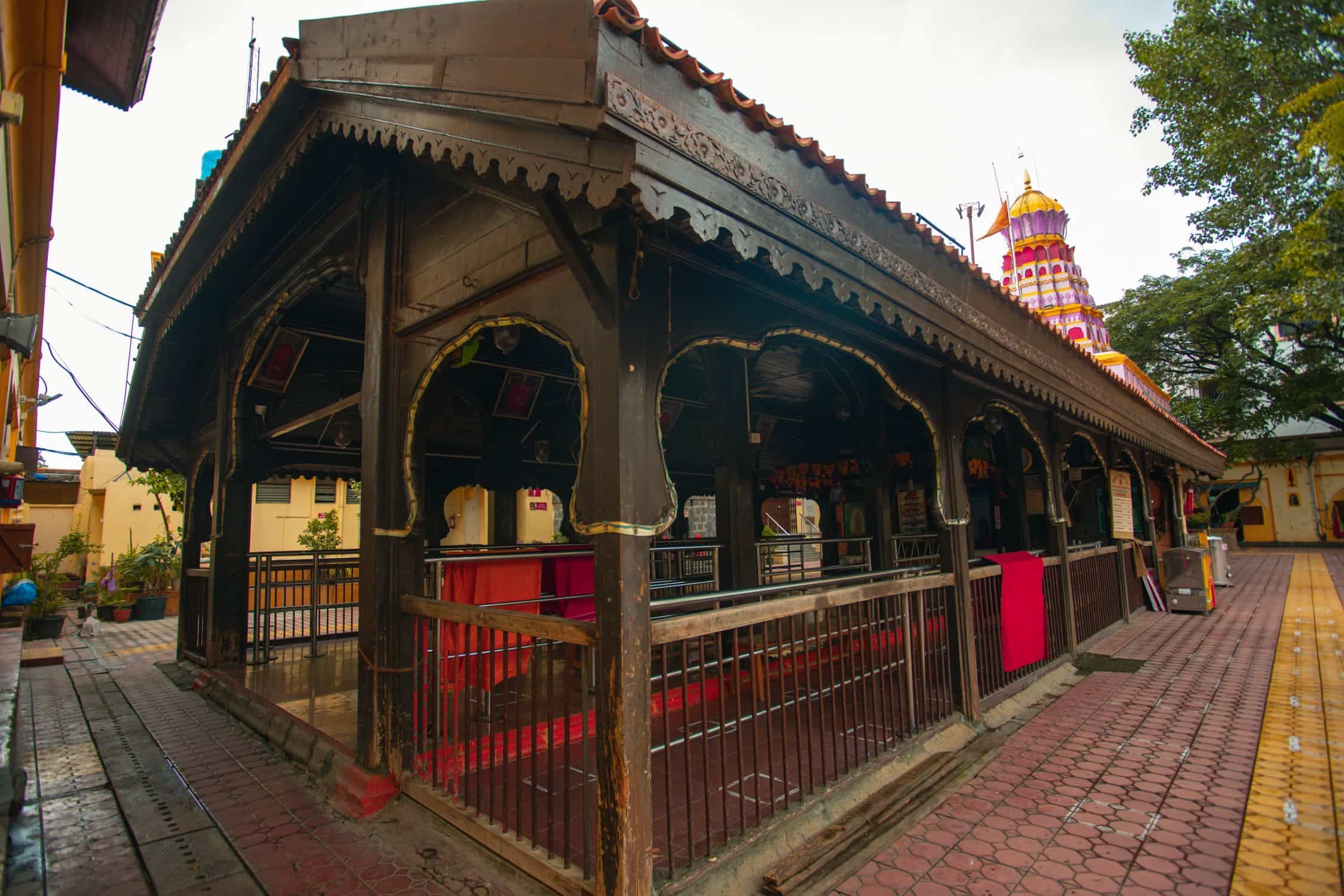 One of the ‘ashtavinyaka’ (8 Ganeshas) temples of Maharashtra, the Chintamani Mandir of Theur is located 25 kilometers from Pune and is one of the larger and more famous of the eight revered shrines of Ganesha. Surrounded by the Mula river on three sides, it is just adjacent to the Pune-Solapur national highway. 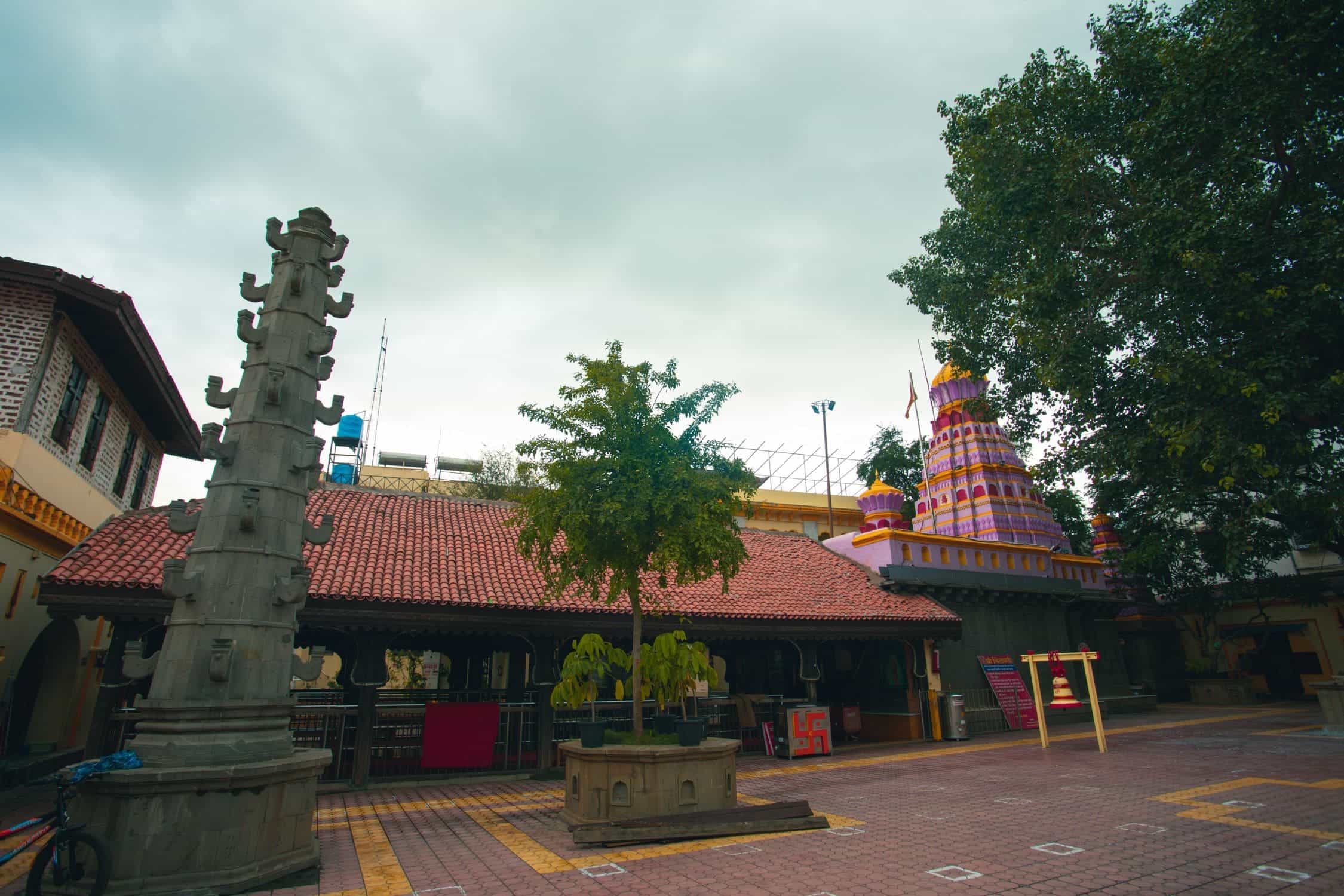 Ganesha utsav is performed at Theur in the month of Bhadrapad and in Magh. A fair is arranged on this occasion. One more important festival celebrated at Theur is on kartik vadya 8 as per Hindu calendar which is the death anniversary of Shrimant Madhavrav Peshwa and his wife Ramabai saheb. 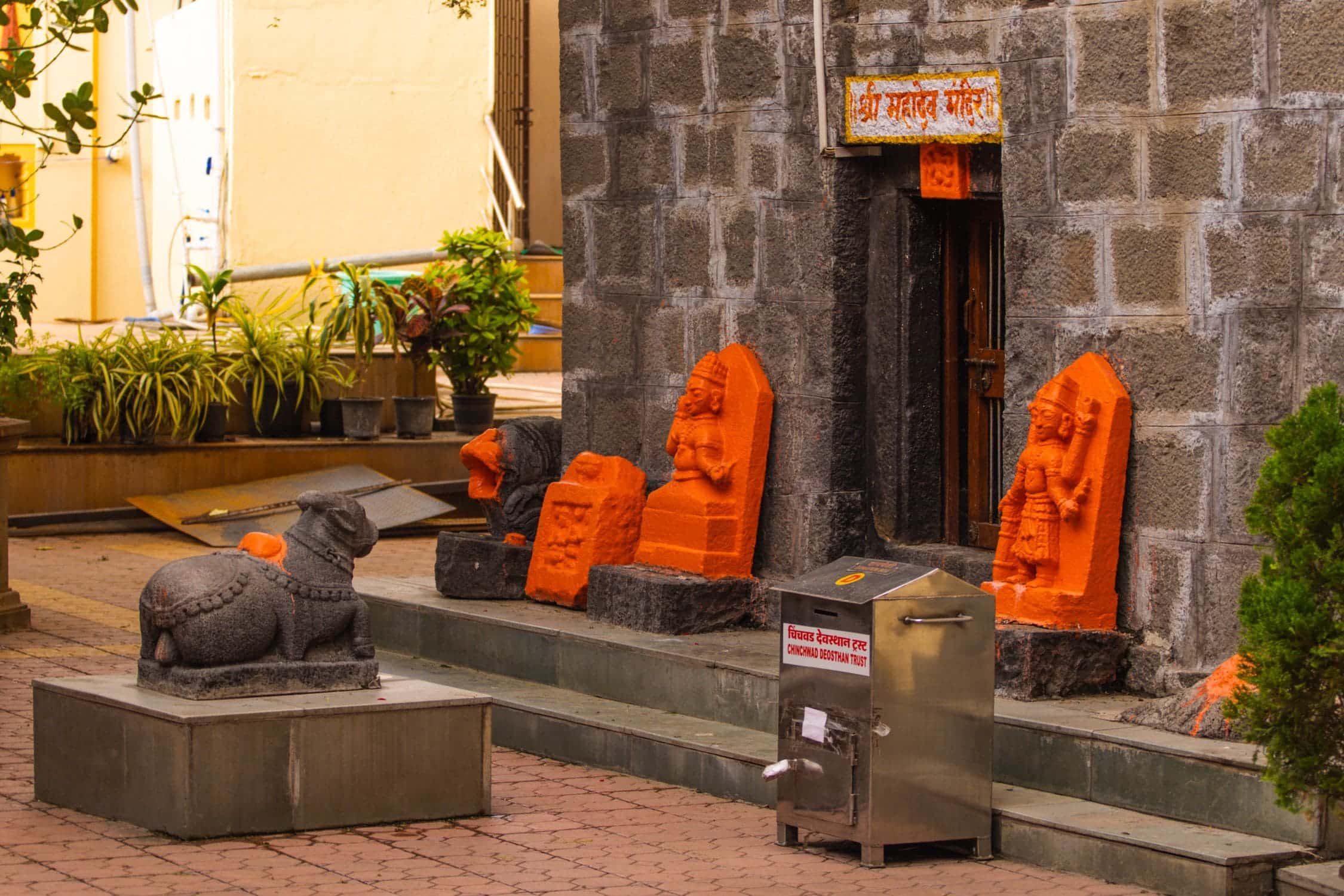 The temple’s main gate located to the north is relatively smaller compared to the scale of the temple. The central icon of Chintamani-Ganesha faces east. The hall also has a black stone water fountain. Besides the central shrine dedicated to Ganesha, there are a number of smaller shrines in the temple complex, including the Mahadeva Mandir, Vishnu-Lakshmi Mandir, Hanuman Mandir, etc. Behind the temple is the Peshwa Wada. It was once the residence of Madhavrao. Like other ashtavinyaka icons, the central icon of Ganesha is considered self-manifested and therefore there are hardly any features except for the head studded with jewel eyes and trunk. 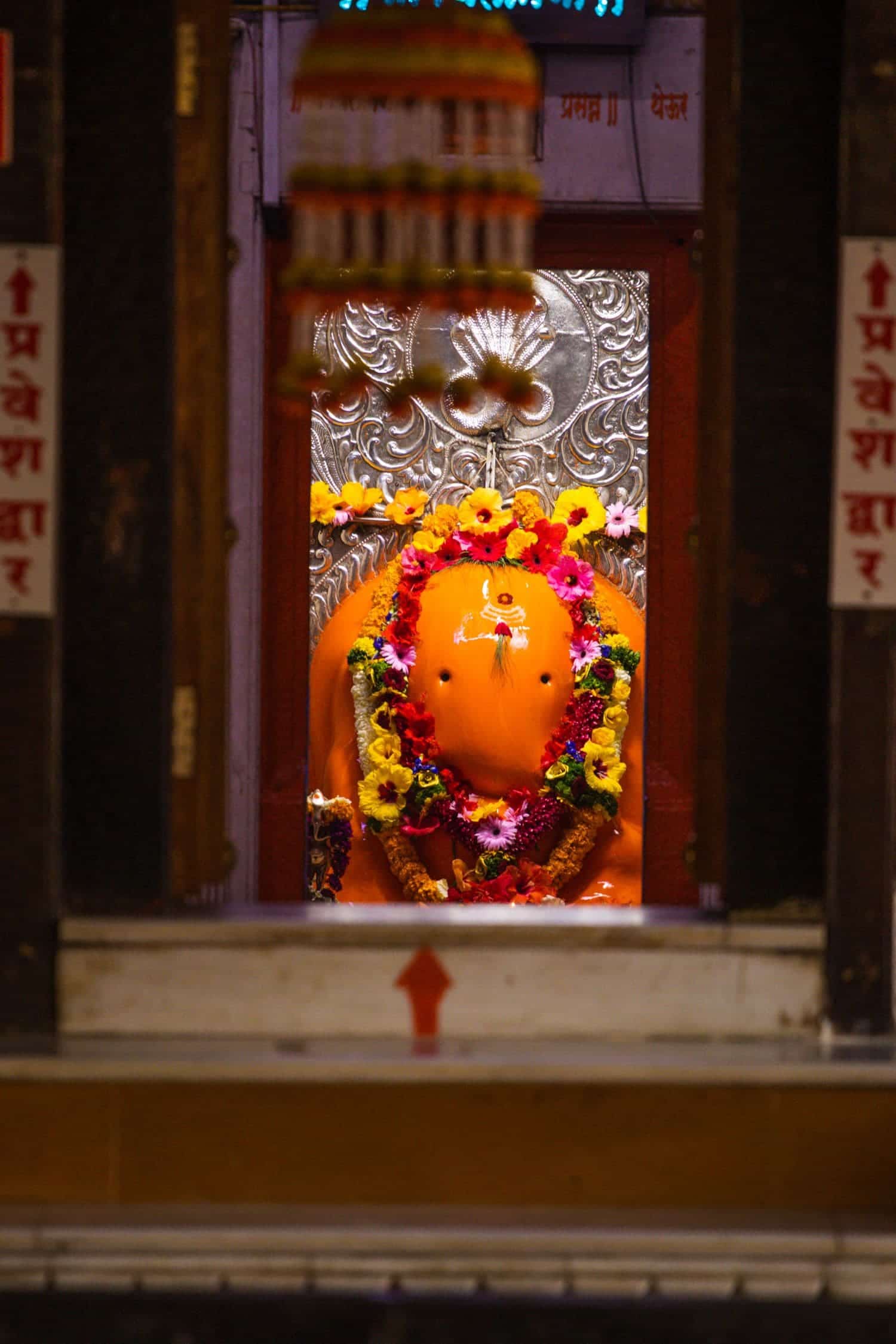 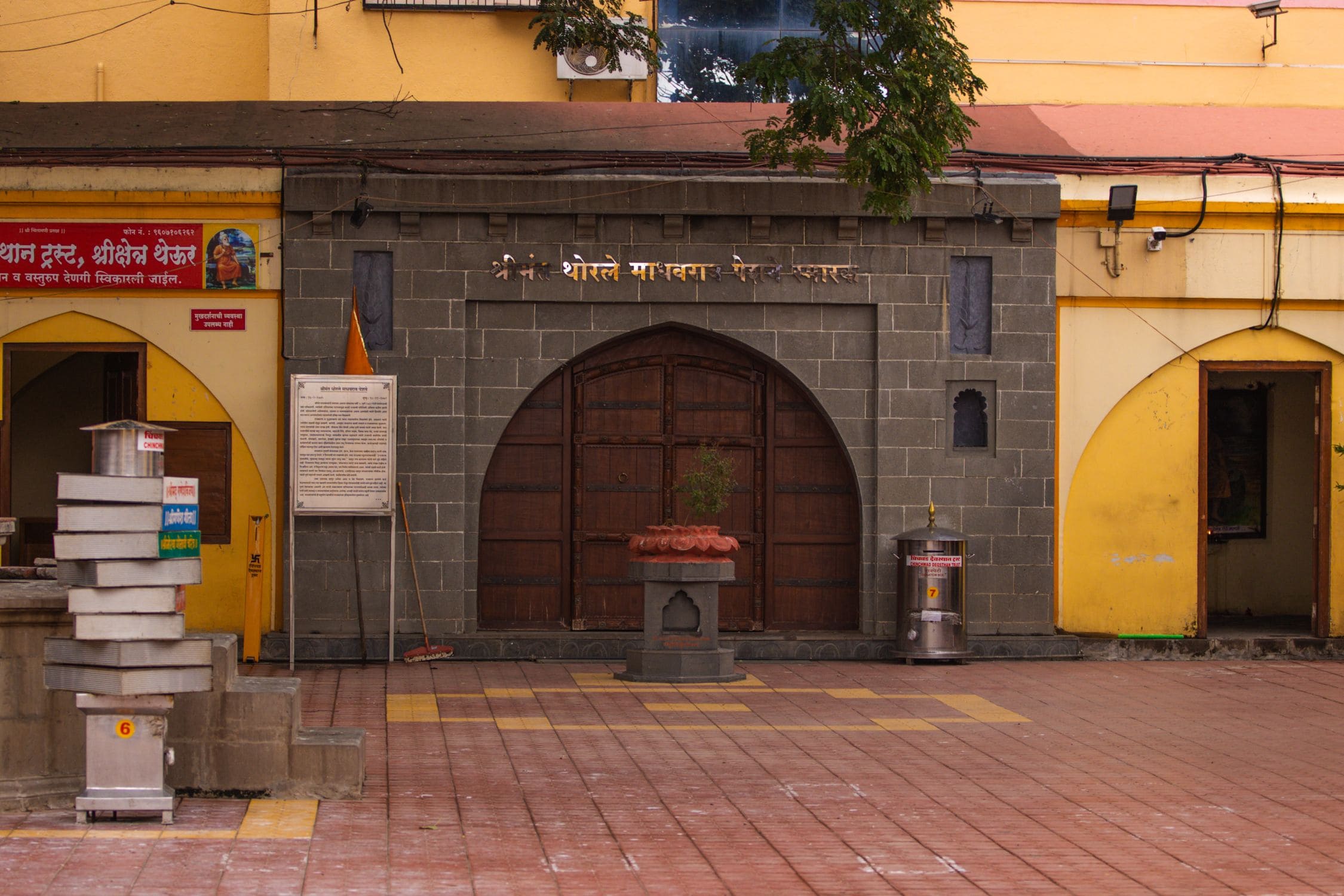