Cuisines To Explore
In Maharashtra
Scroll or drag to navigate

Bharit (mashed eggplant) is a marathi meal made by chopping grilled eggplant and combining it with tomato, onion, herbs, and spices. Grilling the eggplant over charcoal or direct heat adds a smokey flavour to the dish. The cooked chopped tomato, browned onion, ginger, garlic, cumin, fresh cilantro (coriander leaves), chile pepper, and mustard oil or a neutral vegetable oil are then combined with the mashed eggplant. Traditionally, the dish is served with flatbread (particularly, roti or paratha) and rice, as well as raita, a yoghurt salad. It is served hot with dal or baati in Maharashtra


Vangyache bharit, as it is known in Maharashtra, is offered in social events such as wedding ceremonies, particularly in the northern Khandesh region. A unique "bharit party" is held during the harvest season. Bharit is traditionally served with puri. In the Maharashtra regions of Vidarbha and Khandesh, two varieties are popular: kachha ("raw") bharit and phodni cha (with tadka) bharit.


All of the components in kachha bharit are used raw, with the exception of the eggplant. Raw spring onions, tomatoes, green chilies, green coriander, and fresh fenugreek leaves are mixed with flame-roasted eggplant and raw linseed oil or peanut oil. In phodni cha bharit, the aforesaid components are sautéed in oil with spices before being blended with mashed eggplants and cooked together. When eggplants are roasted on dried cotton plant stems, it is regarded a delicacy in Vidarbha and Khandesh, giving the dish a characteristic smokey flavour. The meal is accompanied by dal, bhakri, and rice. 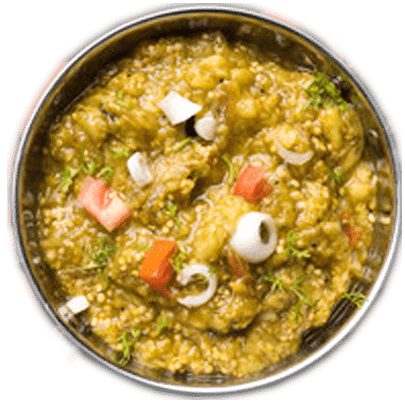 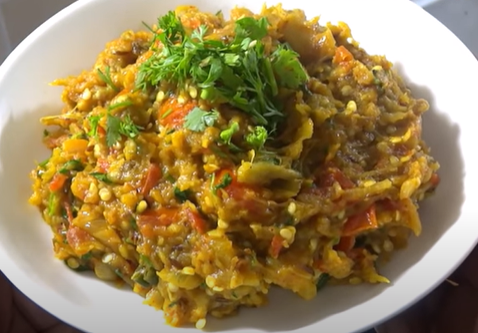 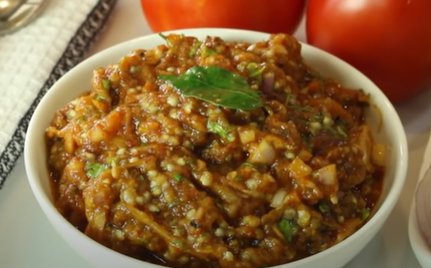