Bhaja Caves is known as one of the earliest Buddhist rock-cut monasteries in Deccan. It dates back to the 2nd Century CE. This group of caves include 22 caves.

Located in the vicinity of the second major 'IT Hub of India' - Pune, Bhaje caves have a long and rich history behind them. The caves belong to the Theravada (Hinayana) tradition of Buddhism and are amongst the oldest in Western India. They are approx 400 ft above the village of Bhaja, used as an important ancient trading route that ran from the Arabian Sea eastward into the Deccan plateau. This route is the 'Bhor Ghat', a strategic mountain pass that connects the Deccan to the ports of the Konkan coast.
The sole 'Chaityagriha' (prayer hall) at this site is considered extraordinary in comparison to any site. It is one of the earliest rock-cut chaitya griha in Maharashtra. It has 27 pillars around the hall with wooden beams fixed on its ceiling. The cave had a horseshoe arched entrance with a wooden facade. Apart from this Chaityagriha, the complex of Bhaja caves is full of rock-cut Vihara and Stupas. Viharas (monasteries) here show simplicity at its best. Only one such vihara here has some architectural decoration. Yet, along with this simplicity, there are Viharas which are double storied. 14 rock-cut stupas contain the relics of teachers who lived and died here. They are built as memorials for them.
A vihara at the other end of the site houses the sculptural masterpieces of the early art of the Deccan. There are two panels carved on the call of the verandah adjacent to a door depicting an elephant rider and a chariot rider with their consorts. These panels have been identified by some of the scholars as Surya (The Sun god) and Indra (The kings of Gods). The verandah is decorated with few other sculptural panels as attendants and few narrative scenes.

The Bhaja caves are situated almost 59.2 kilometres northwest from Pune on the Mumbai-Pune Highway in the Maval taluka of Pune District. Lonavala, a famous hill-station, is 12 km away from the site. The group of caves are carved in the hill of Visapur fort.

The entire complex of Bhaja caves allows one to experience a walk in the past.
One must visit:
Cave 6- Irregular vihara.
Cave 9- Rail pattern ornaments, broken animal structures, verandah.
Cave 12 - the Chaityagriha
Monolithic Stupa gallery
Cave 19- the Vihara with Indra and Surya

Bhaja caves have several tourist attractions around them. Along with Bhaje caves below tourist places can be visited:

A variety of cuisines are available in the restaurants nearby. Maharashtrian food is the local speciality.

Tourists should pack necessary things like hats/caps, medications (if any), sunscreen, a water bottle, camera.
Timing to visit the caves is 9:00 A.M. to 5:00 P.M. strictly.
October to March are the best months to visit the caves.
Summers should be avoided as the climate is extremely hot and sweaty. Bhaja Caves is known as one of the earliest Buddhist rock-cut monasteries in Deccan. It dates back to the 2nd Century CE. This group of caves include 22 caves. 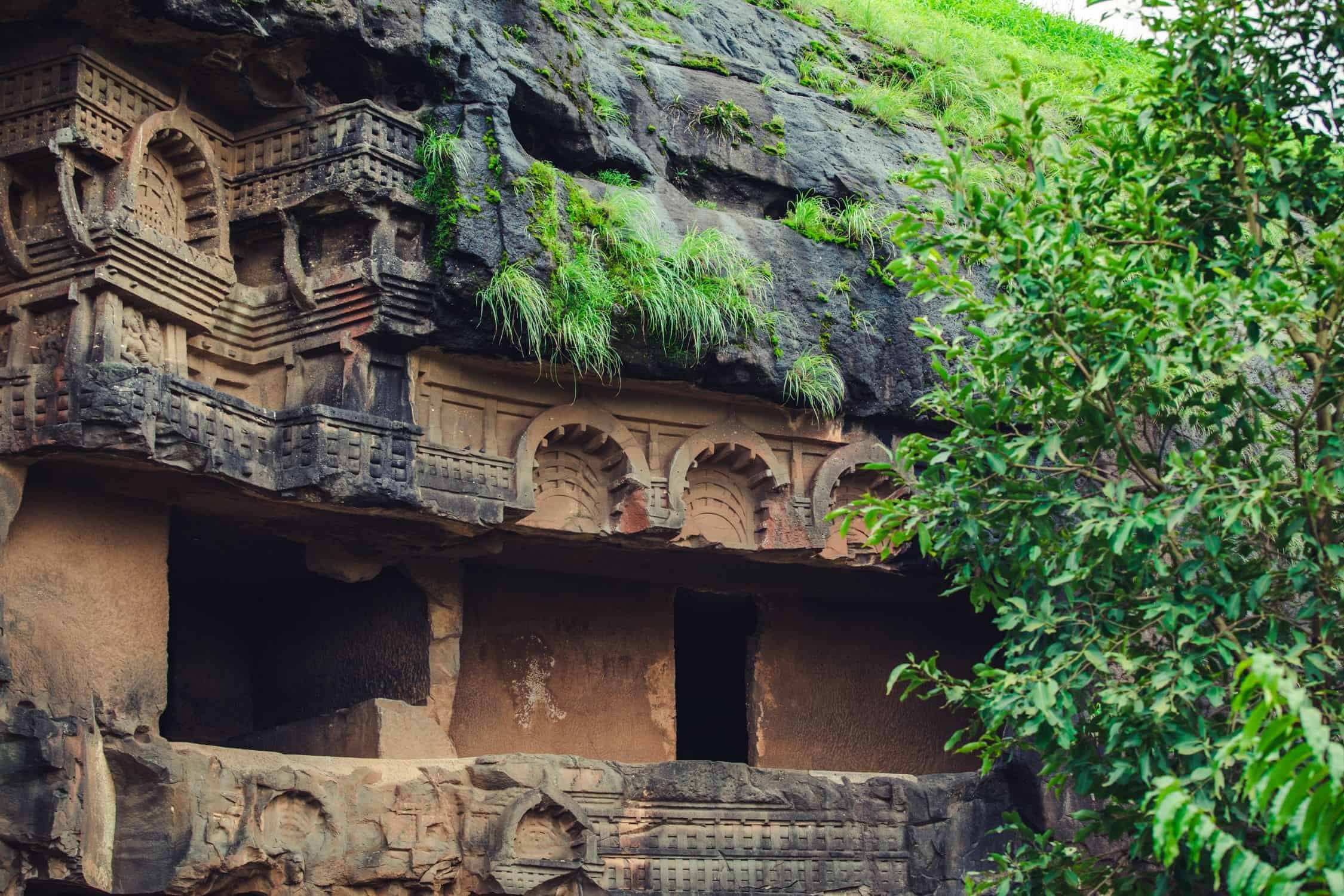 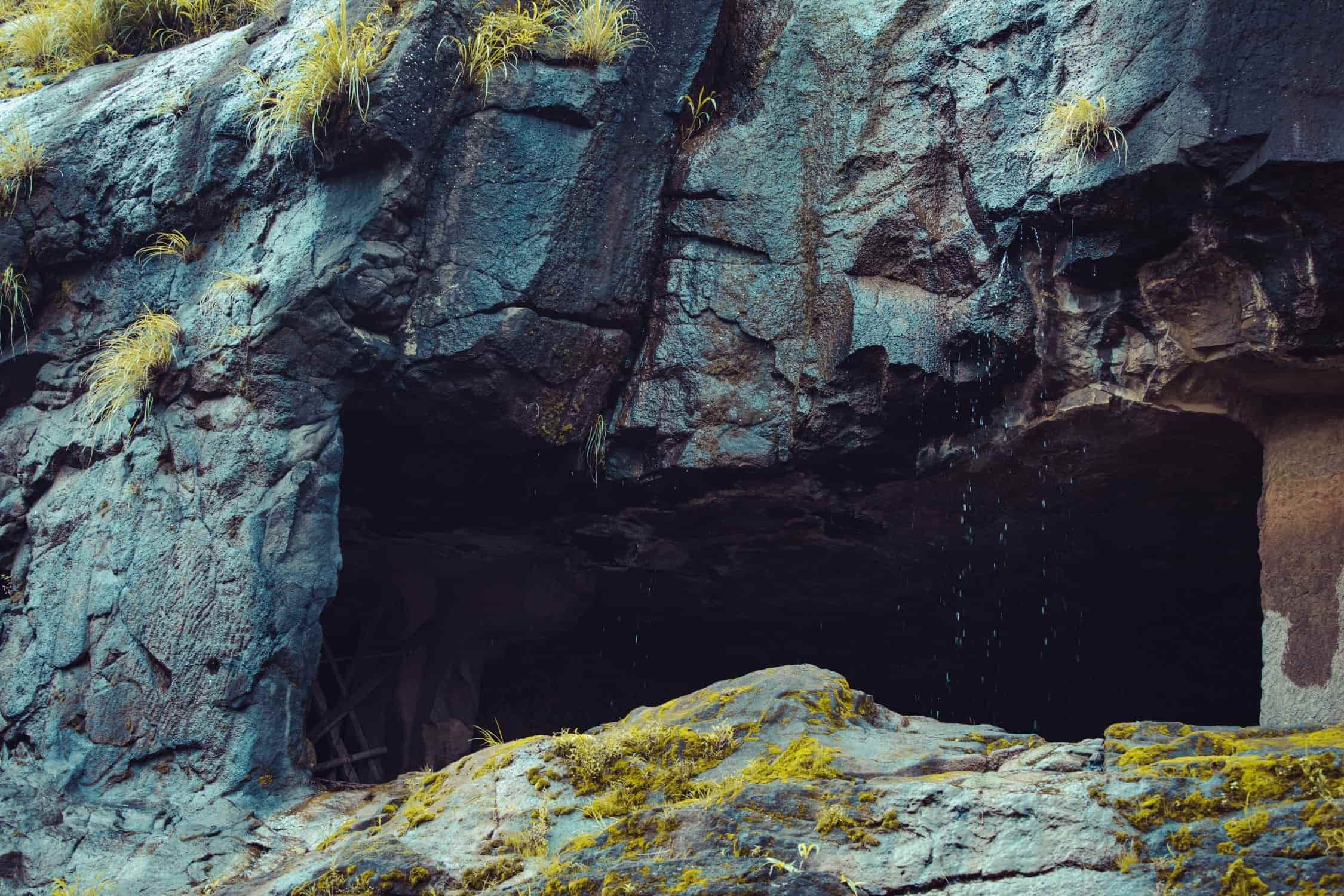 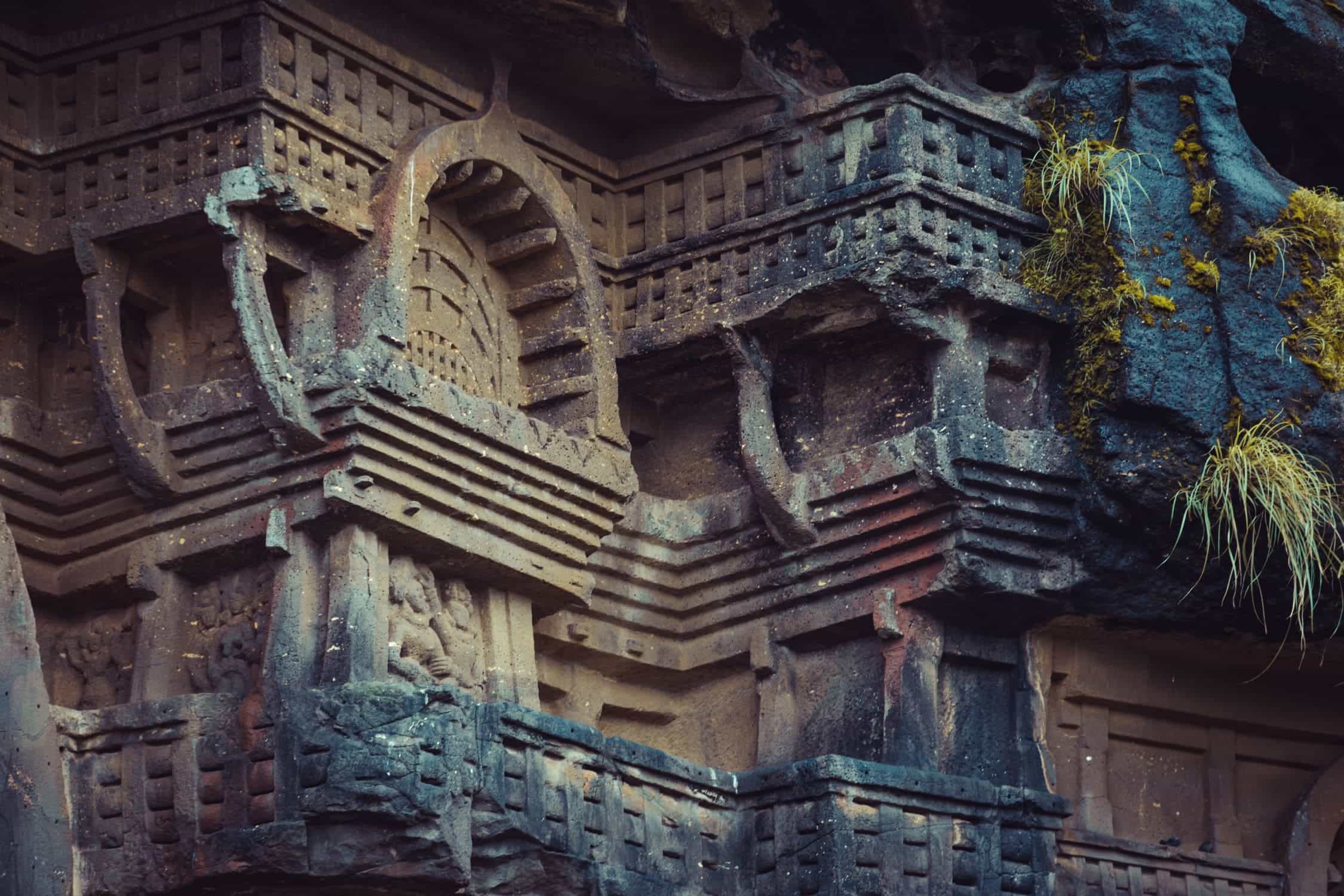 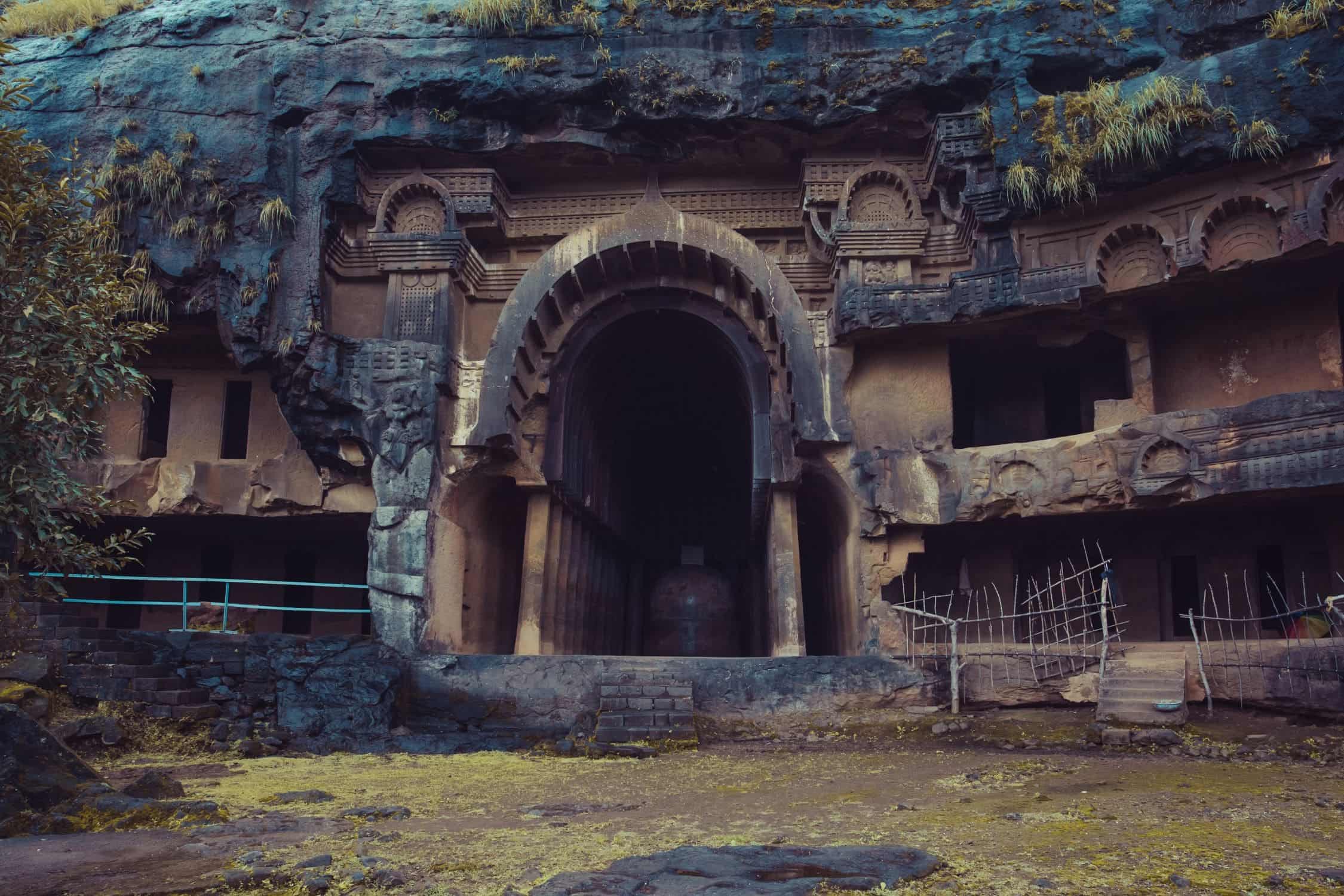 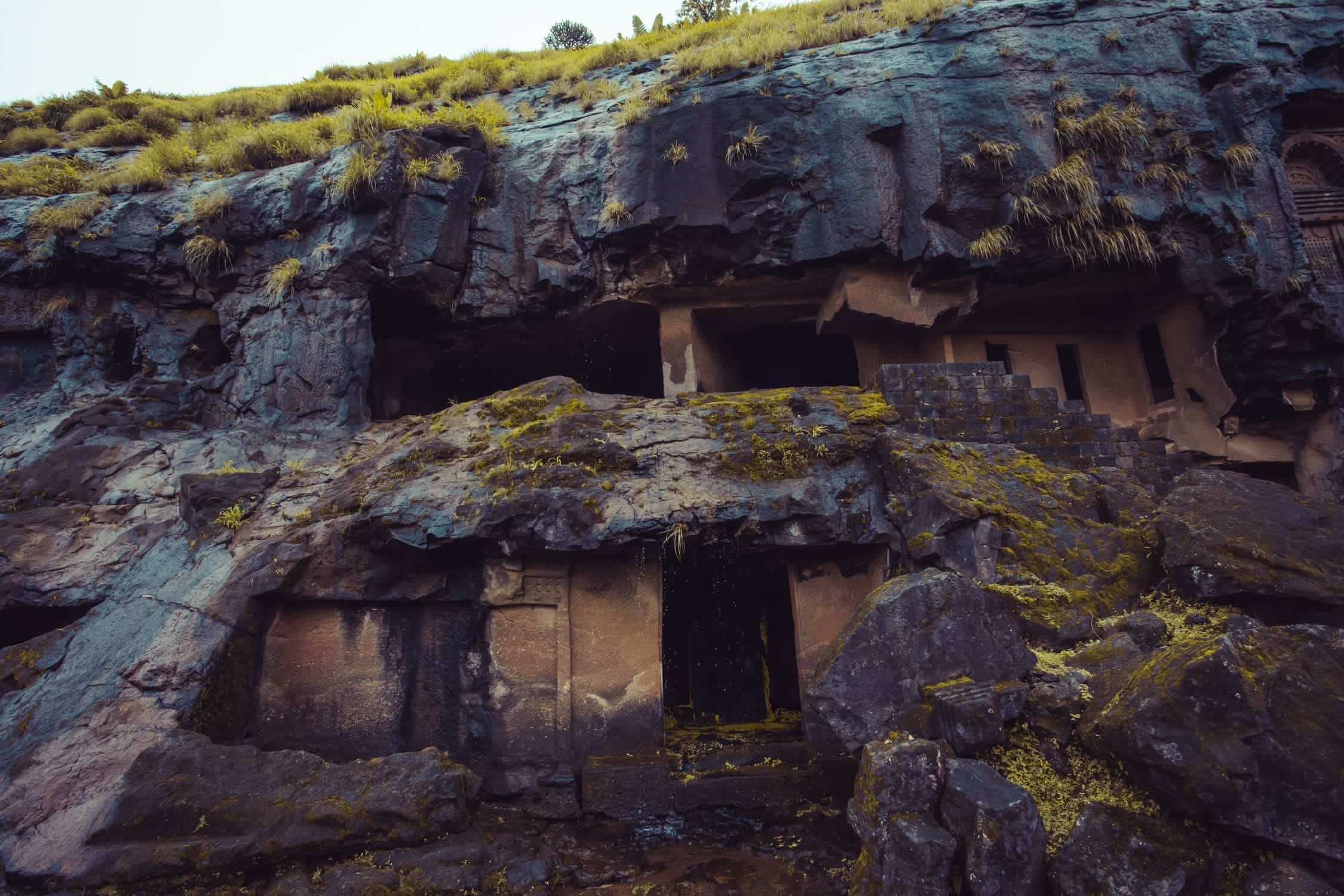 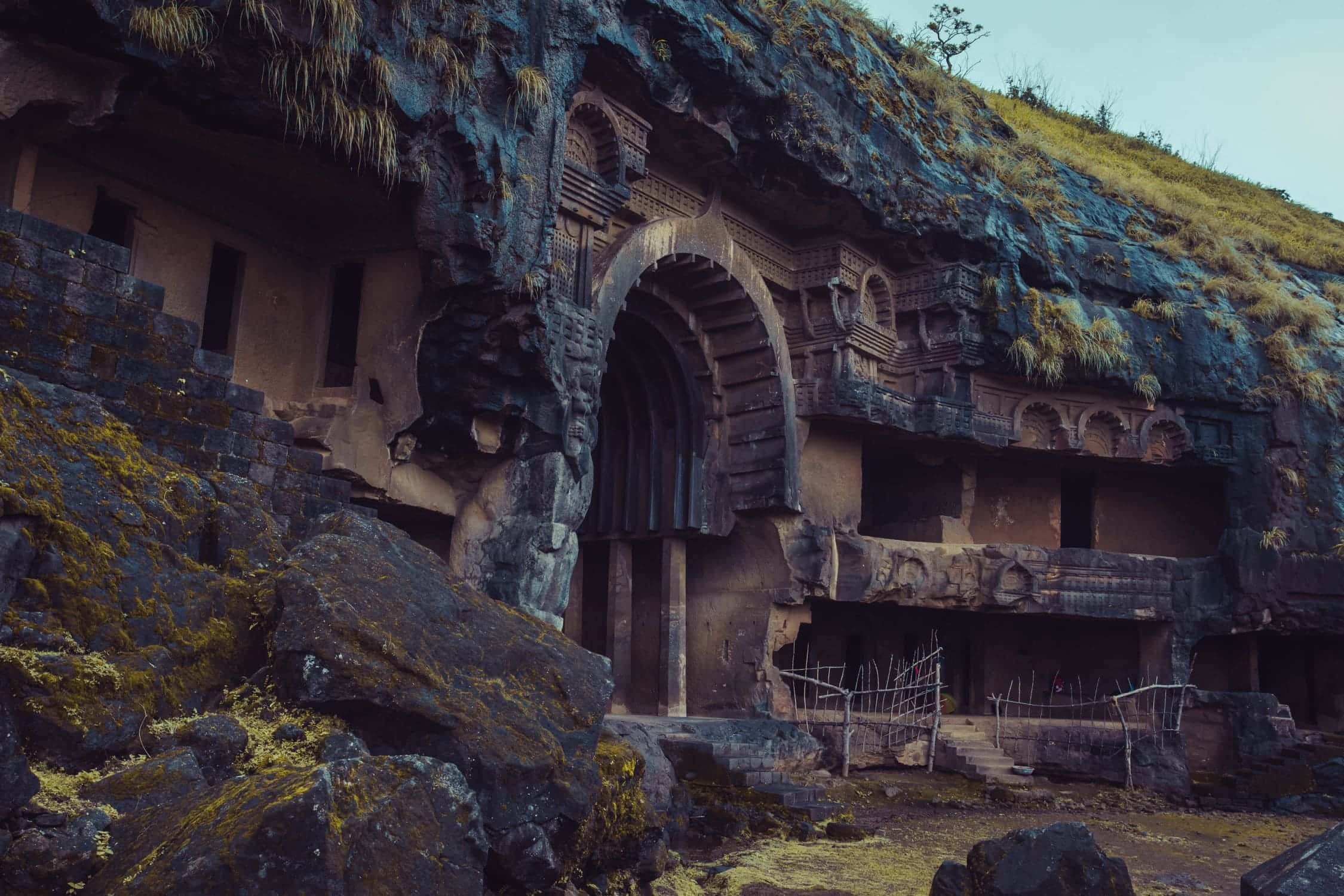 Easily accessible by the roadway. From Malavli to Bhaja is approximately 10 minutes drive. Local buses run from Lonavala to Bhaja. Auto and Taxis are also available. It takes around 25 minutes to reach Bhaja Caves from Lonavala. One can come to Mumbai or Pune by flight and then choose any of the above ways to come to Bhaja.

The nearest railway station from Bhaja is Malavli Railway Station, which is 3 KM away. One can take a train from Mumbai or Pune to Lonavala then to Malavli.