To sing songs praising the Almighty  in the accompaniment of musical  instruments like the Mridangam or  Pakhawaj and cymbals is a  Bhajana. Bhajana is an important component  of devotional music and the Bhakti  sect.


To sing songs praising the Almighty in the accompaniment of
musical instruments like the Mridangam or Pakhawaj and
cymbals is a Bhajana. Bhajana is an important component of
devotional music and the Bhakti sect. Though its origin can be
traced to the Samaveda, the first clear mention of Bhajana is in
the Dasham Skandha of Shrimad Bhagavata, which dates back
to the 4th century BCE. The concept of Bhajana has spread
throughout the country since then.
The image of the deity is placed on a platform and worshipped
per rituals. The Veenekari or the person who plays the Veena
performs the Puja. After the Puja of the deity, he performs the
Puja of the Veena in the same way. The Bhajana starts with
remembering the Ishta-devata, the Kula-devata in Sanskrit and
then starts the Bhajana in the regional language. The
Veenekari is accompanied by a group of people playing
cymbals and providing the chorus too.
The groups performing Bhajana are called Bhajana Mandali in
North India. The songs of Chaitanya Mahaprabhu, Chandidasa
are recited in the North. In Bengal, Gaudiya Bhajana-s are
recited. The Sampradayik Akhada Bhajana written by Tulsidas
recited along with the Bhajana of Meerabai, Surdas and Kabir,
accompanied by Mridangam and Karatala. Shaiva Akhada-s
praise the Shiva in the Bhajana playing the Chimata-s,
Mridangam or Dhol. The singers of the Bhajana are called
Bhagavatar in Karnataka. The chief Bhagavatar dances to the

tune of Mridangam, Veena, Cymbal and Harmonium.
The tradition of Bhajana-s was started in Maharashtra by the
Warkari Sampradaya since the time of Saint Namdev in the
13th century. Before that, the Mahanubhav Sampradaya t used
to have devotional songs in their Matha, and it was restricted
to their followers only, as the outsiders were not allowed in the
Matha-s. Warkari Sampradaya broke that barrier, and
participating in the Bhajana was opened up for everybody.
Namasmaran was always an integral part of the Navavidha
Bhakti and held a prime place in the tradition of the Warkari
Sampradaya. The image of Pandurang is kept at a central
place. Veenekari stands in the middle, and the Bhajana starts
with the chanting of Jai Jai Ram Krishna Hari to the
accompaniment of Cymbals, Veena and Pakhawaj. The
Abhanga-s are sung in a set sequence, and usually, Abhanga
written by most of the saints are recited. There are different
groups of Warkari-s which are called Fad. Loyalty to the
groups is an unwritten norm expected from the bhajani.
The followers of Dattatreya also have the Bhajan Mandal-s
across Maharashtra. And they follow the same traditions like
that of the Warkari’s with the only difference being that of the
deity. Sometimes the Datta Sampradaya Bhajana-s are
accompanied by devotional dancing too. Ramadasi
Sampradaya, The Shakti Sampradaya, the Ganapatya
Sampradaya follow their traditions and styles while praising
their deities.
Some schools teach the intricacies of Bhajana singing. The
competitions of the Bhajana Mandal are held in larger cities.

To sing songs praising the Almighty in the accompaniment of musical instruments like the Mridangam or Pakhawaj and cymbals is a Bhajana.

Bhajana forms an important component of devotional music and the Bhakti Sect. 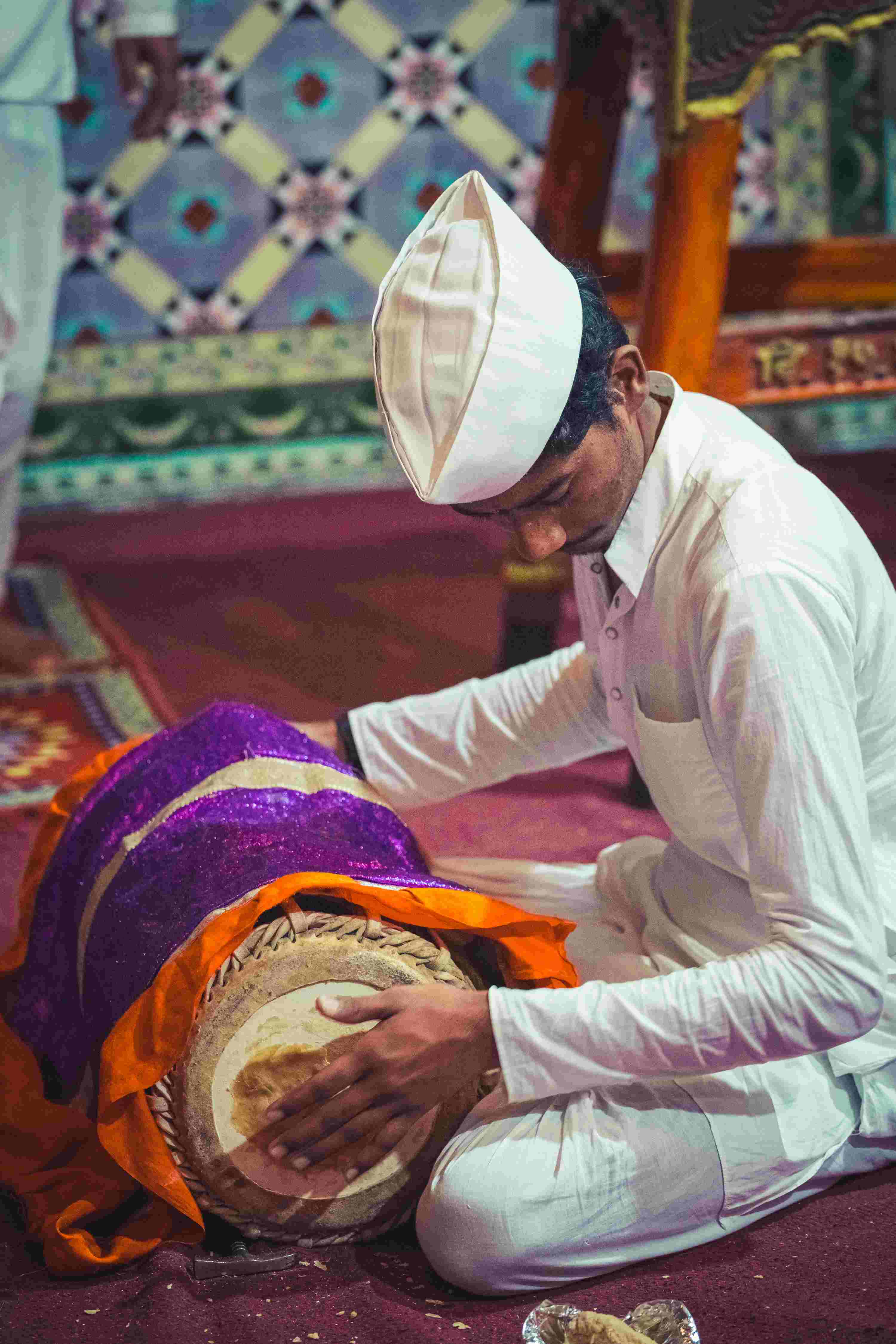