Situated on the western coast of Maharashtra, the fort of Vasai was the central command of the Northern Portuguese Province. Sopara, an adjoining Vasai village was well known as an old port in the early centuries of the Common Era during the Indo-Roman trade exchange. In the medieval period, this area was under the Sultans of Gujarat.

To keep the Portuguese from spreading their impact any further north of Chaul, Bahadur Shah asked Malik Tokan, the Governor of Diu, to brace Bassein. Nuno da Cunha, the Portuguese General, with an armada of 150 sails and 4000 men headed towards this fort. Malik Tokan attempted to reconcile with the Portuguese, yet he couldn't succeed. The Muhammadans escaped leaving enormous stores of provisions and ammunition. The Portuguese protected the island and lost just two soldiers.

With its tremendous Citadels and two-storied dwellings, Bassein was near Goa. It was one of the biggest and most extravagant of the Portuguese settlements. Bassein, including the shipbuilding, trade exchange of fine Timber and building stone were as hard as granite. The same was used in all the Goa chapels/churches and royal residences.

The fort has ruins of various Portuguese constructions including administrative workplaces, private quarters, Churches and monasteries etc. The fort strengthened and situated near the mouth of river Ulhas on the shore. This fort has seen two significant changes before. First when it was taken over by the Portuguese from the Sultans of Gujrat in the sixteenth century CE and the second was when Marathas crushed Portuguese in the eighteenth century CE.

There are remains of 7 chapels and one working temple of the Maratha time frame. There are two doors to the fort known as Land Gate and Sea Gate. The majority of the structures in the fort are currently in broken down conditions, which were harmed essentially during the Maratha-Portuguese battle. Portuguese utilized this fortified town primarily as an administrative headquarter and the place of residence for their aristocrats.

This fort was a religious centre during the Portuguese period which subsequently saw the spread of Christianity in nearby localities. Indeed, even today, the East Indian Community in the Vasai district gives us a look at Portuguese culture.

Vasai is a historical place and important city near Mumbai's western suburbs, located in the Palghar district. The fort is located near Shore at the mouth of river Ulhas. Though it was an island earlier it has now become part of the mainland due to the siltation of the river bed.

Vasai is a historical place and significant city close to Mumbai's western suburbs, situated in the Palghar district of Maharashtra. The Vasai Fort is situated near to shore at the mouth of river Ulhas. However it was an island before, it has now become a part of the central area because of the siltation of the river bed.

The Vasai fort consists of ruins of 7 churches, monasteries, administrative buildings and remains of the citadel from the Portuguese period.
Tourists can also have a nice view of Vasai Creek, which is visible from the Vasai Jetty near the Sea gate of the fort.
There are also a few temples like Nageshwar Temple, Hanuman Temple and Vajreshwari Temple within the fort.

As Vasai is famous for its beaches, one can always choose to visit any nearest beach according to their schedule.
● There is also a Buddhist Stupa in Sopara, it is only a few kilometres from the fort of Vasai (12.9 KM).
●  Jivdani Mata Temple is also one of the places of Tourist attractions(20.2 KM).
● The Tungareshwar Waterfall and temple are also close to this fort (18.3 KM).
●  Arnala Fort
●  Ghodbunder fort (31.7 KM)
●  Pelhar Dam (22 KM)
●  Vajragad (7.3 KM)

Seafood, Sukeli (dry banana), Chicken Poha Bhujing are a few specialities of the local Vasaikars as it is on the coastal belt of Maharashtra.
Restaurants which serve various types of local as well as other food are available near to the fort, where the tourist can have a nice meal.
There are also various other food joints. The Vasai Khau Galli is the most visited place to have snacks.

Various places for accommodation, bed and breakfast, and homestay are available.
There is Vasai Police Station near the Fort (0.6 KM) and a few Hospitals before entering the fortification.

●  You can visit Vasai fort at any time of the year.
●  The best time to visit this fort is the rainy season as the whole it is covered with greenery.
●  Entry to this fort is free 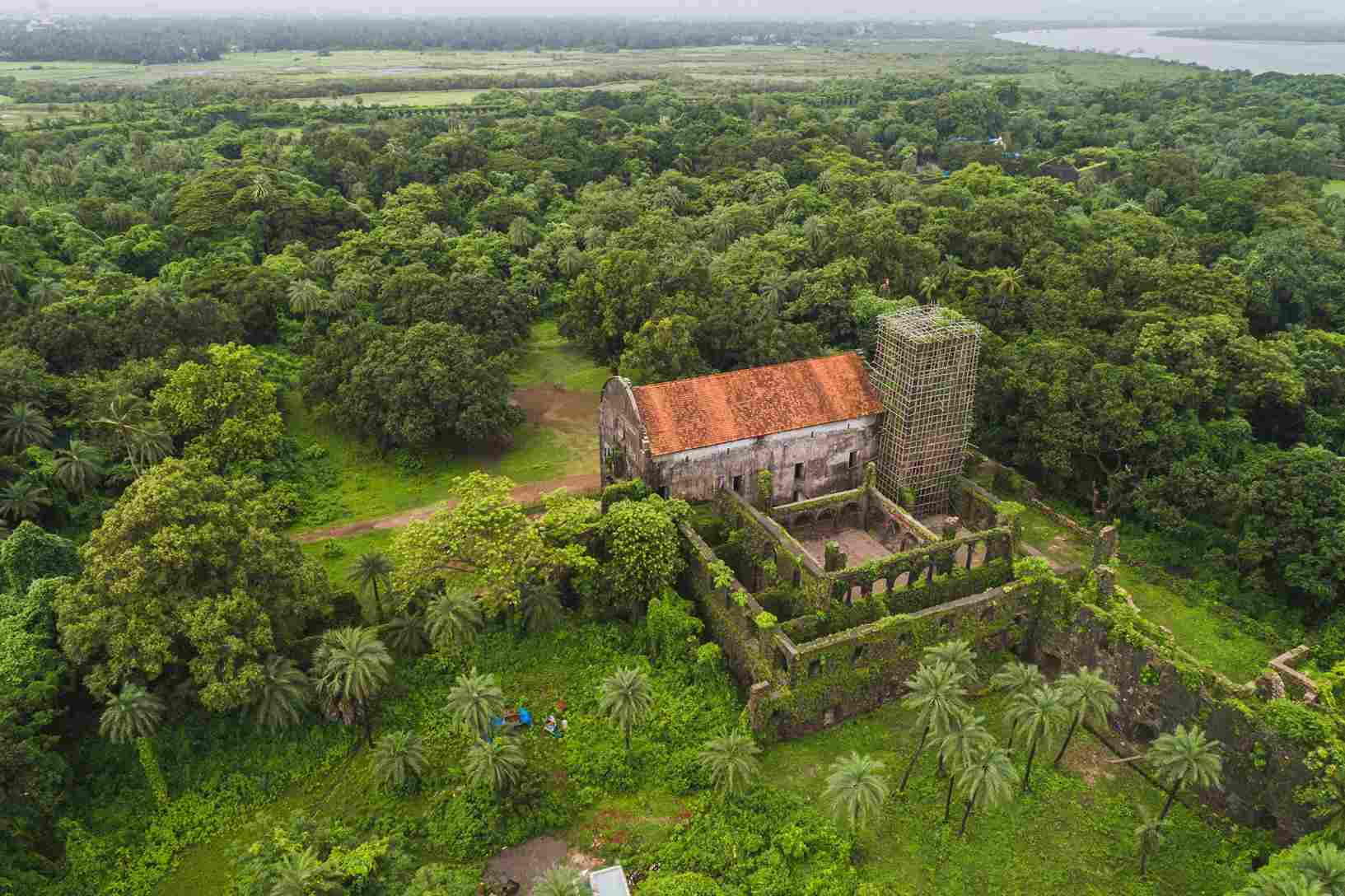 Vasai fort was built with an intention to keep a watch on the region of Saashti. In 1737, the Marathas tried to capture the fort, but failed. Later Bajirao Peshwa chose Chimajiappa for the mission. 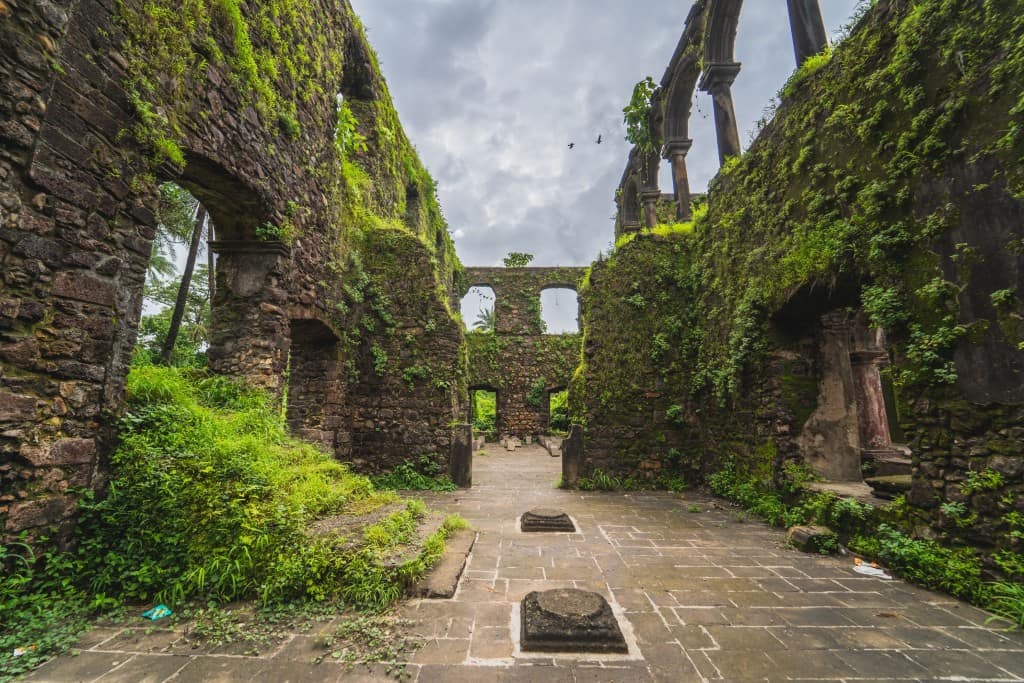 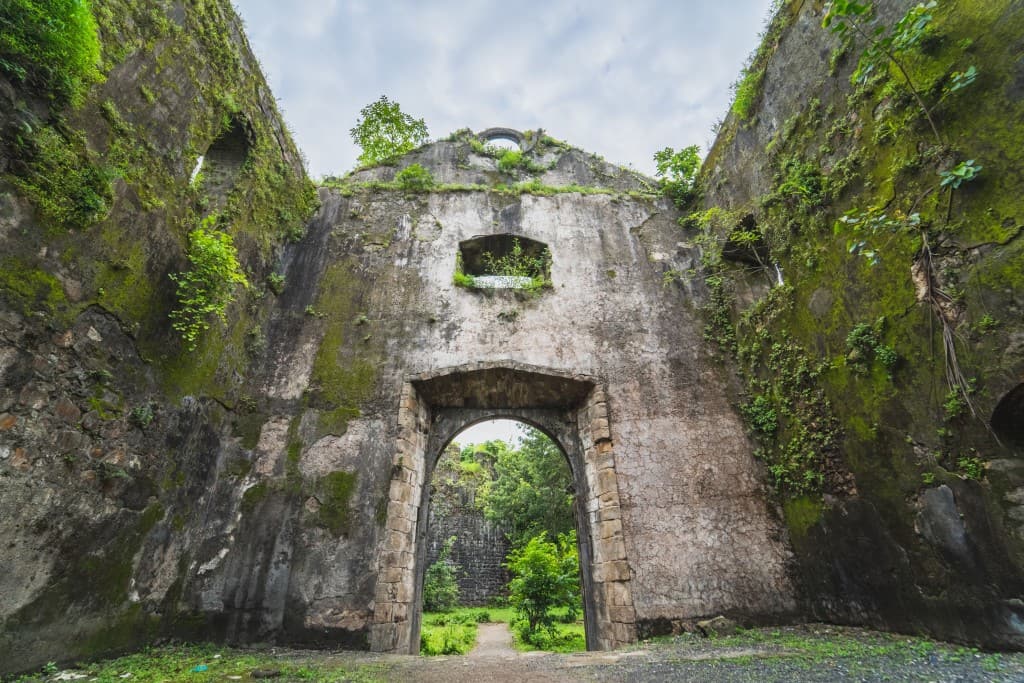 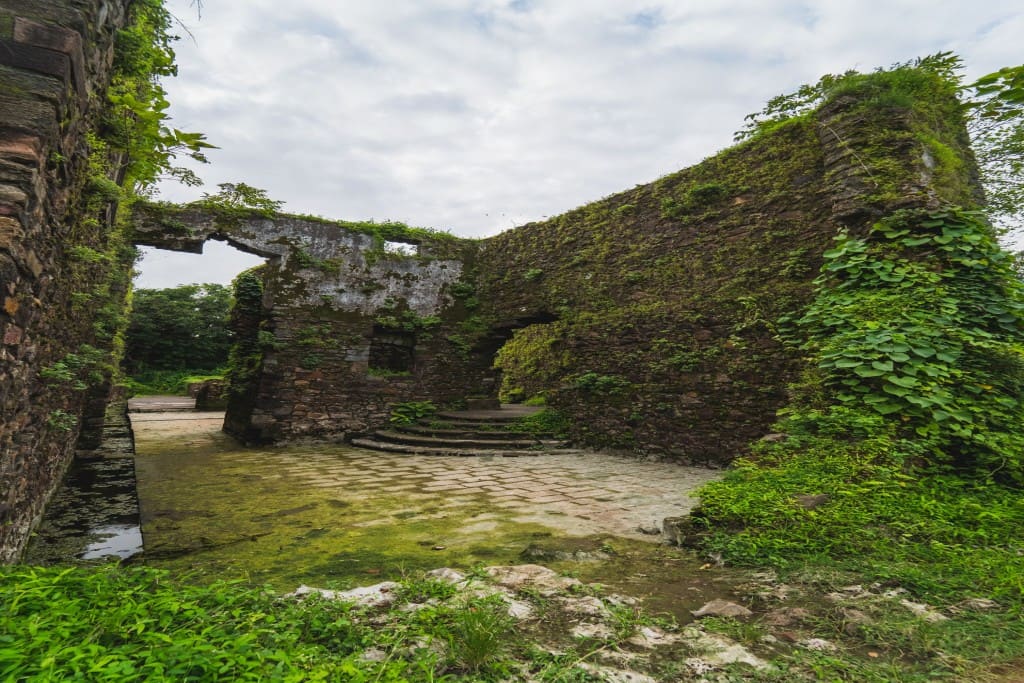 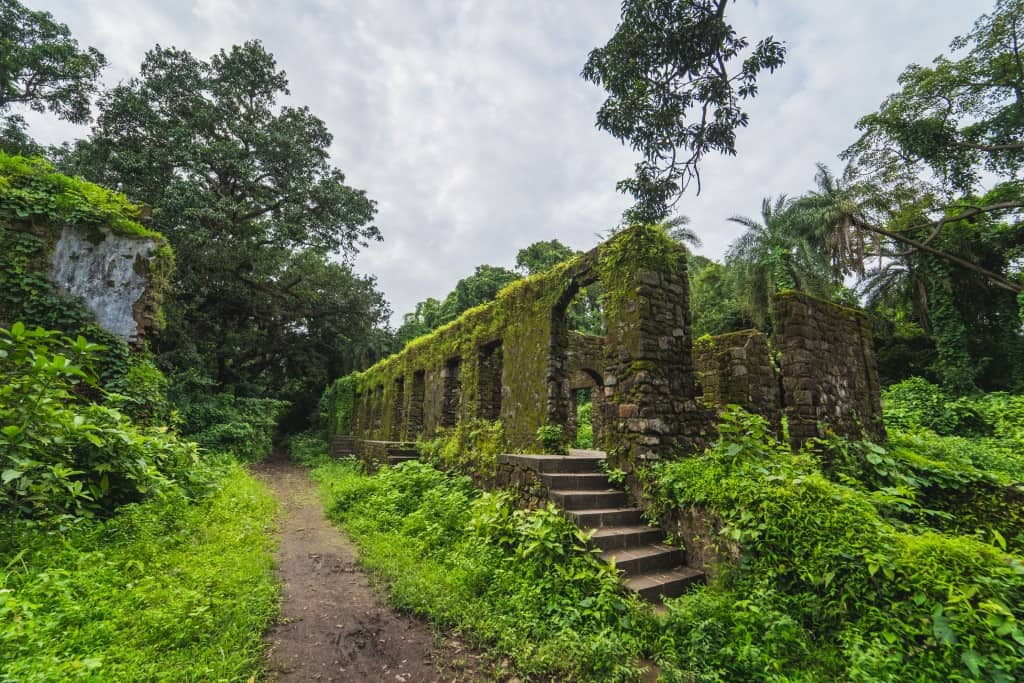 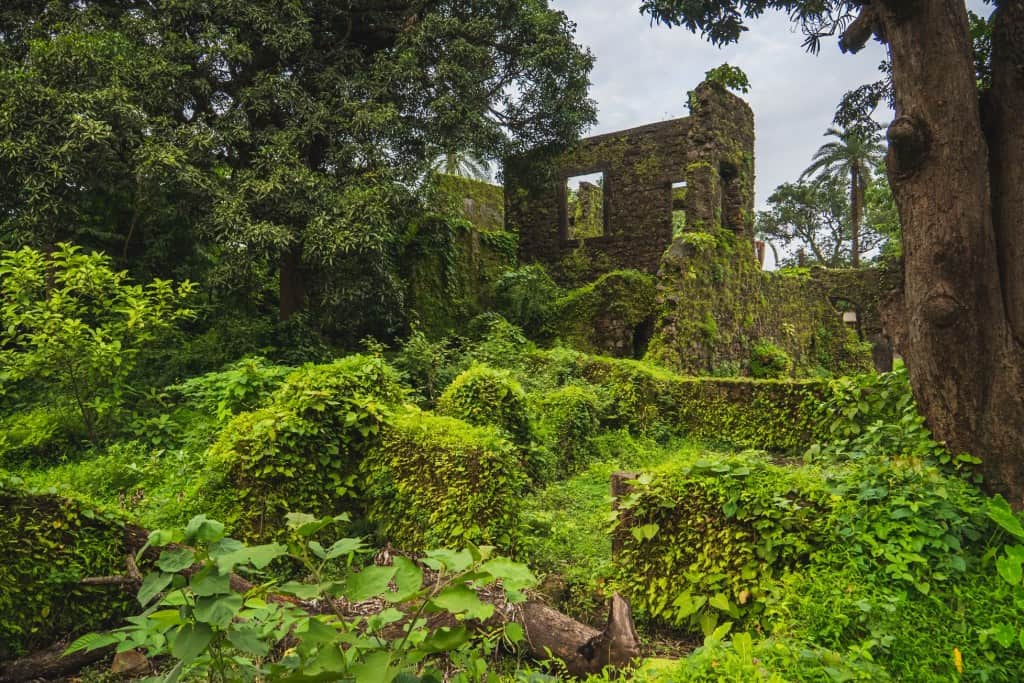 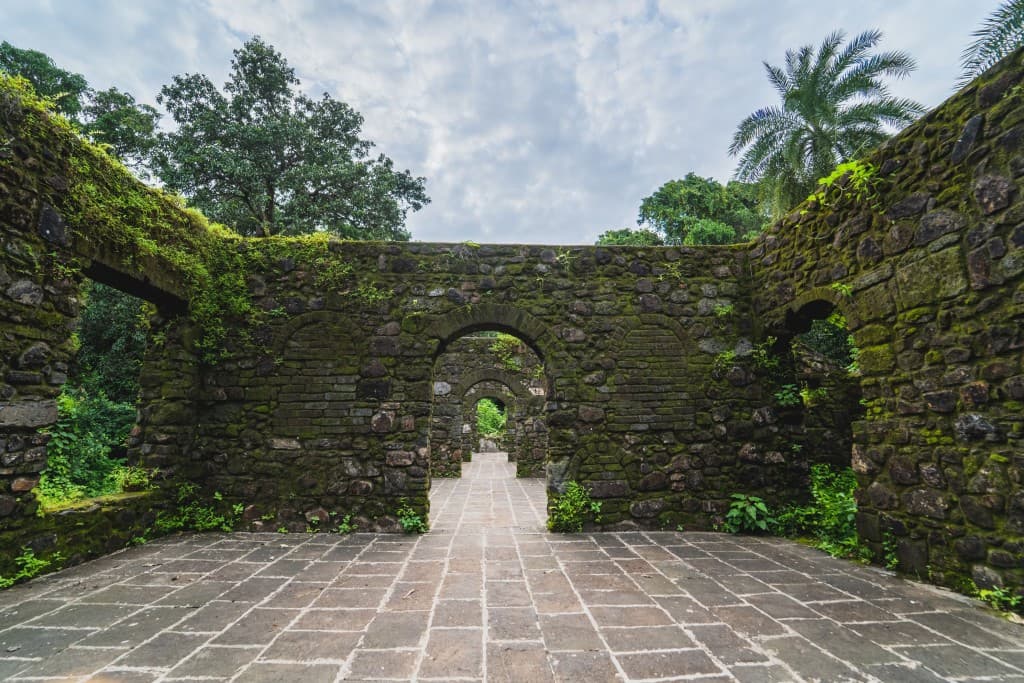 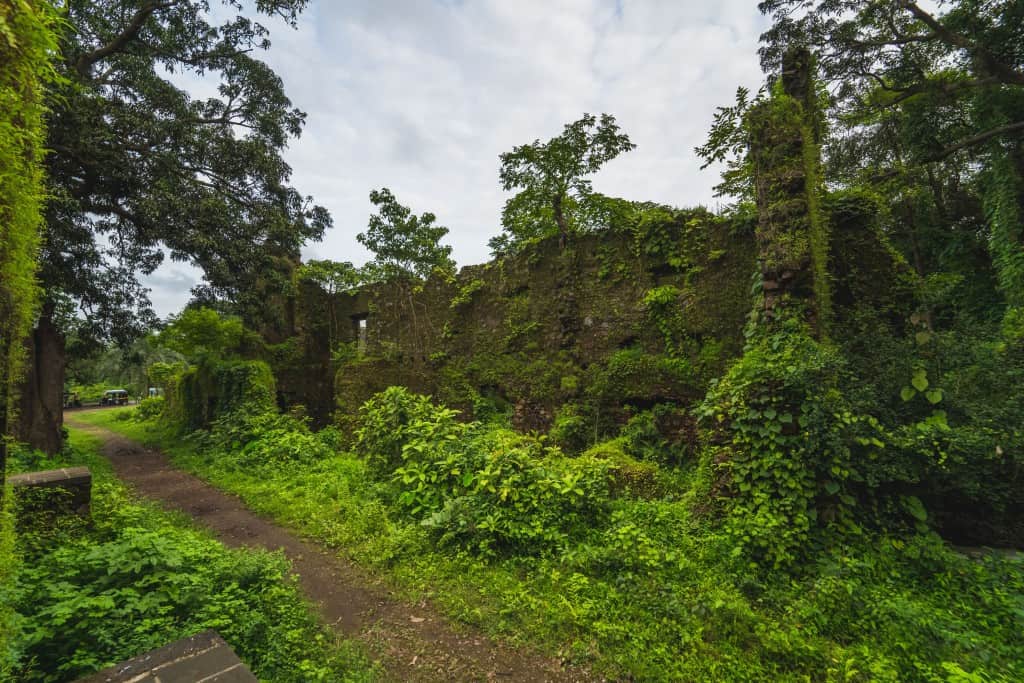 A tourist can hire a cab or other private vehicle to reach Vasai Fort.

There are no MTDC resorts near this fort.