The Worli Fort is a lesser-known historical landmark in the city of Mumbai. It was constructed by the British around 1675. The fort overlooks Mahim Bay, and is toward the end of a fishing village. The fort explores a British-fabricated style of construction with a wide sea views from the top of its walls.

In all there are 11 forts in Mumbai, which guarded the various creeks and the sea routes. The British built a fort on Worli Island in 1675, which forms “L” shaped region with Bandra fort and Mahim fort. This region was characterized by silent sea, and hence suitable for sea traffic.

This fort is conserved to some extent by the Archaeology department; hence the fort is in a good shape. There is a tower on the fort for hanging bell. There is a well inside the fort, a temple and a gym. There are stairs to climb around the ramparts. From here, we can see up to Bandra and Mahim. There are 3 platforms for canons, built outside the fort. These were built to keep the pirates at bay.
It takes half an hour to see the fort.

The Worli Fort was founded by the Portuguese and was built by Britishers in 1675. The fort is set along the coast. Worli Fort has an arched gateway at its entrance and then leads to a tunnel. The tunnel further directs towards the beautiful interior of the fort. It is well designed by the architects as the interior of the fort leads to two levels. The entrance of the Worli Fort is ornamented with a gigantic gate. There is a bell tower inside the fort to enhance its magnificence and explore architectural significance. Worli Fort has an arched door at its entrance and afterwards leads to a tunnel. This tunnel further coordinates towards the lovely interior of the Fort. The fort was well planned by the architects as the inner sides of the fort explore two levels.
The focal and the expansive corridor add to the magnificence and significance of the Worli Fort. From the entrance gate of the Fort, a central corridor can be seen. Besides, at the more significant level of the Fort when contrasted with the central passage,  there is an expansive corridor along the parapet. The amusing sea of Mahim Bay is visible from this passage. The fort has some of the best architectural components and ancient rarities. The Worli Fort also has a small temple in its yard followed by a garden patch.
The Worli village is home to one of the oldest communities of fishermen still existing in Mumbai. This Koli (fishermen) settlement is a good example of cultural heritage and a guided tour can be done. The rock on which the fort is constructed also had remains of fossils of the amphibians from the region.

The Worli Fort is located at the very tip of the Worli rock protruding in the sea. The Bandra – Worli sea link is visible from there. The fort falls in the Mumbai City District which is also known as South Mumbai locally (this part is Central Mumbai).

Amongst everything, one can soak in the cultural essence of the Kolis (Koli-s), aka fishermen community of the vicinity, the mix of temples, churches and masjids is what makes the area unique in its sense. So, while taking the tour of the fort one must try to find the nuances of such cultural entities which make a difference.
Apart from that, the fort itself is extremely spectacular vantage point to look out into the Arabian Sea whether it be daylight or evening it is always nice to have a scenic view.

The nearest tourist place is the Worli Sea Facing Garden which serves an amazing view of the Bandra- Worli Sea Link. The Garden has a walking route and even facilitates a sea-facing sitting construction. It helps appreciate the view.

Being on the coastal part of Maharashtra, seafood is a speciality here. Worli Village is a fishermen community village aka the Koli community the oldest existing community in Mumbai. The speciality of the community lies in seafood. There are a couple of delicacies which include fish fry and curries being served with rice, rotis and bhakris. (Nobody serves it in the village unless you know somebody locally) Some restaurants and cafes that are available nearby are Worli Café, Be Desi, Sea Corner.

There are various hotels and accommodations near the Worli fort area. The fort isn’t very well accommodated with toilets but there are municipal toilets situated not 2 minutes from the fort. The area has a couple of dispensaries and general as well as medical stores as it is a village itself. Worli Sea Face P.O. serves as the closest and highly functioning post office in the vicinity. The closest police station is the Worli Sea Face Police Station.

•    The fort is free to visit anyone who wishes, with no entry fee.
•    Since its residential area, it is suggested visiting during the daytime. The fort gate is open from 9 am to 5 pm 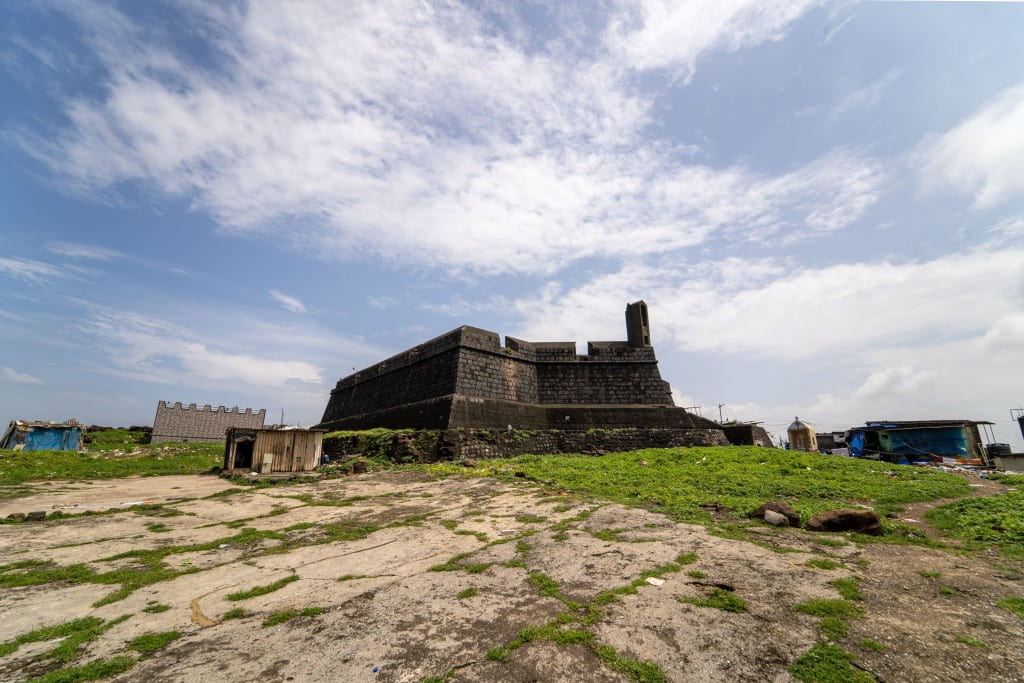 In all there are 11 forts in Mumbai, which guarded the various creeks and the sea routes. 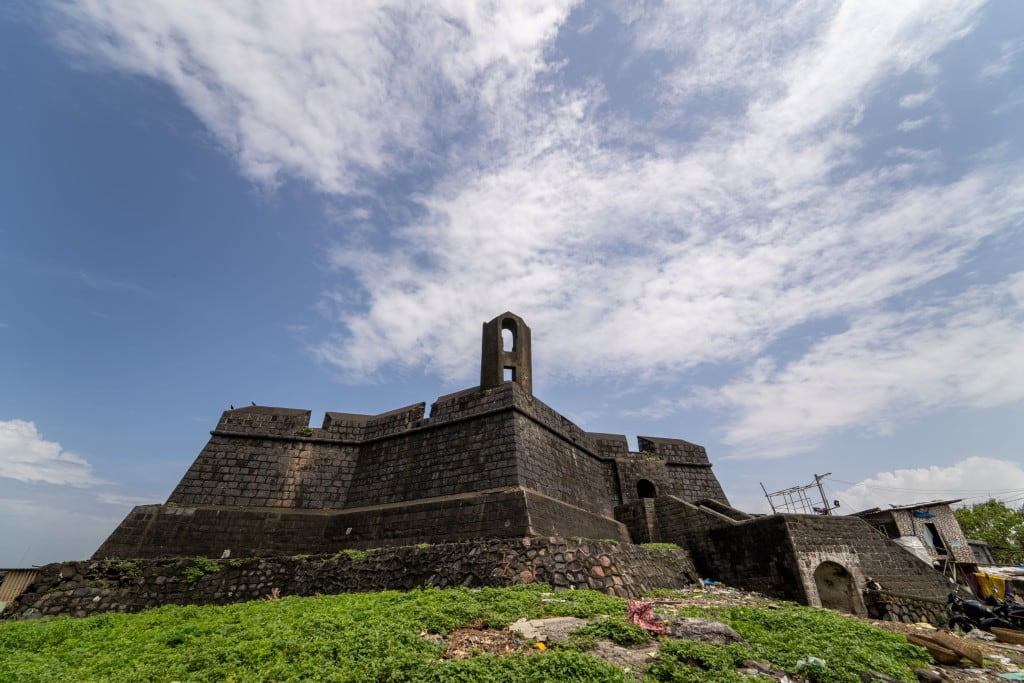 There is a well inside the fort, a temple and a gym. There are stairs to climb around the ramparts. From here, we can see up to Bandra and Mahim. 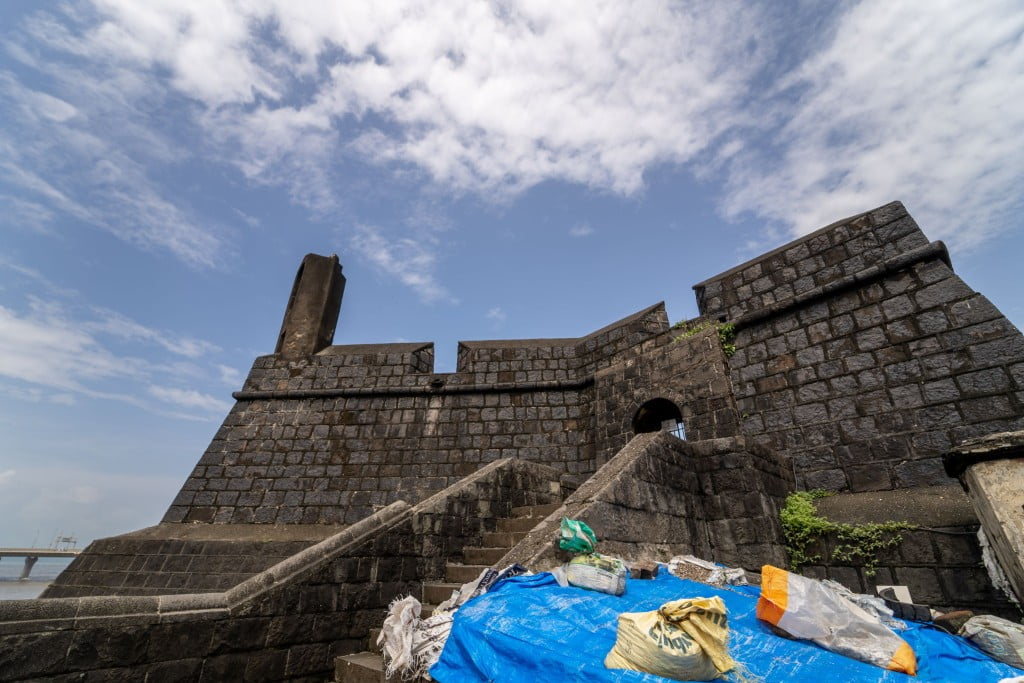 The British built a fort on Worli Island in 1675, which forms “L” shaped region with Bandra fort and Mahim fort. 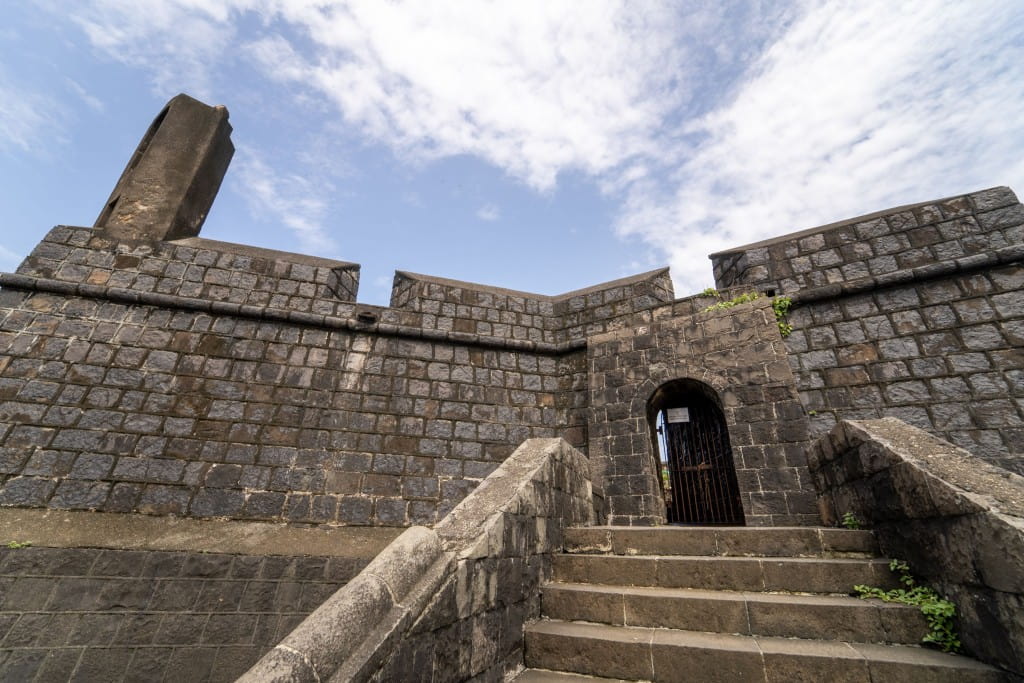 This fort is conserved to some extent by the Archaeology department; hence the fort is in a good shape. 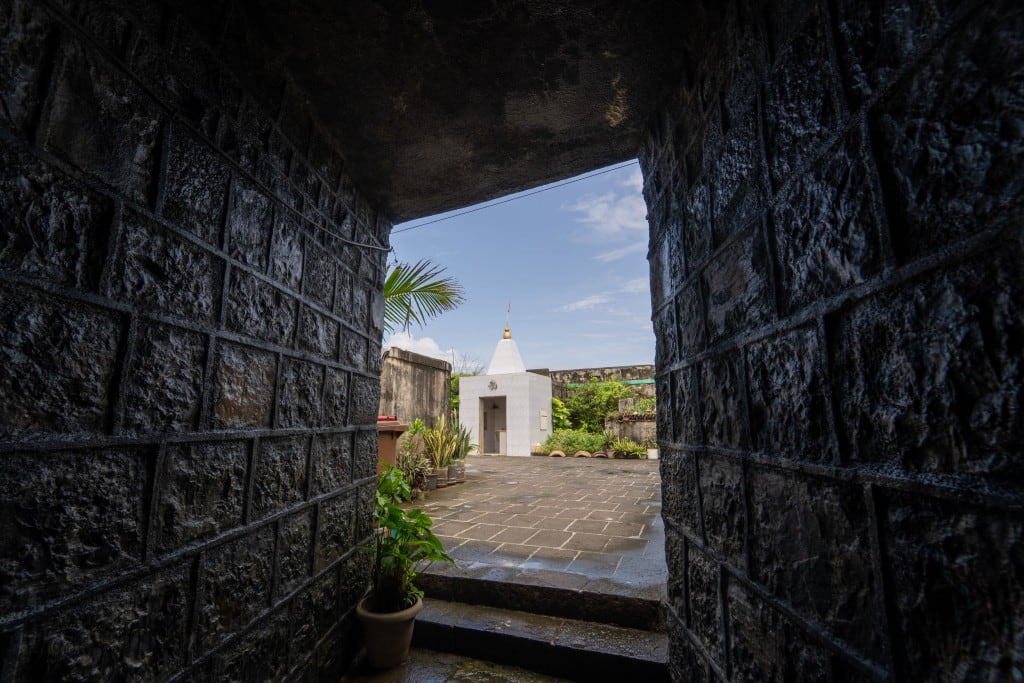 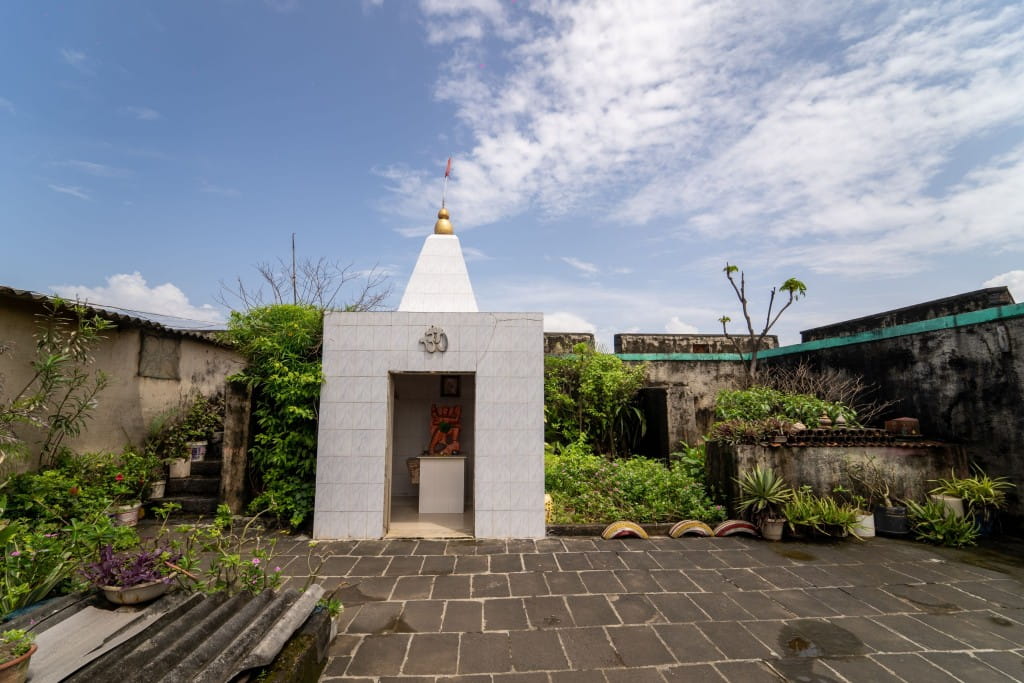 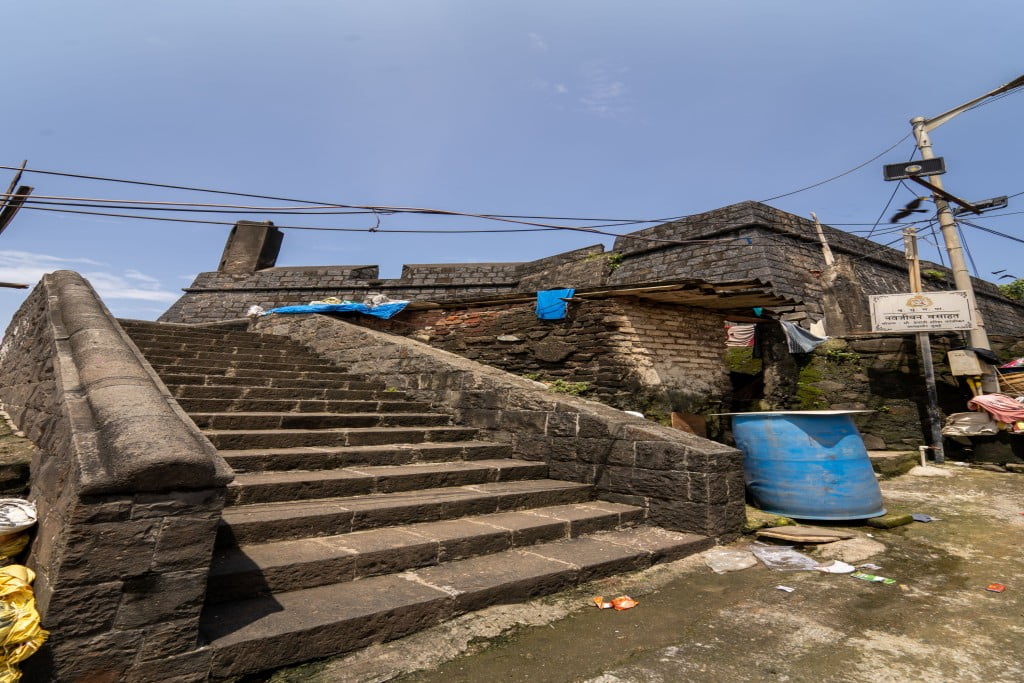 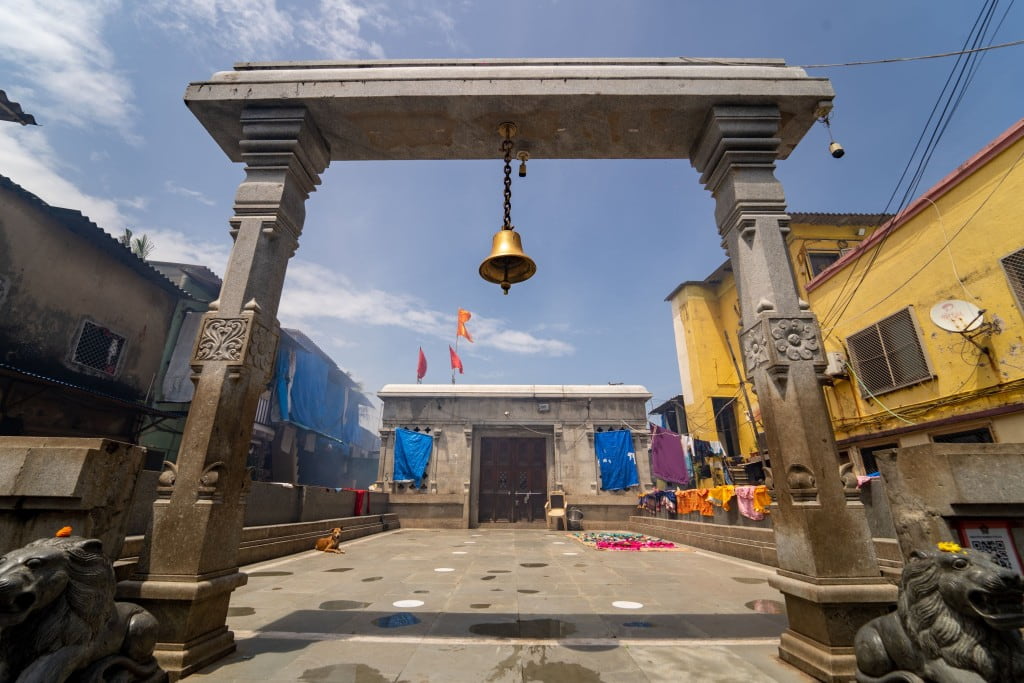 Worli Fort can be accessed by both road and railway