A peep into any Maharashtrian kitchen and one can be sure to find some kinds of ladoos stored on the kitchen shelf. Ladoos are ball shaped sweetmeats having great mythological significance and prepared as an offering in all rituals.

An integral part of Maharashtrian cuisine, there are special ladiesfor every occasion. Again, like all indigenous preparations, the ingredients used are associated with local and seasonal produce and also have a long shelf life. Most of the ladoos can be stored up to 15 days without refrigeration, though eating them when freshly rolled is a mouthwatering experience. Most mothers at some point, try to hide ladoos from their children, only to find empty ladoo jars, guilty faces and sticky little hands later.

One may find similar or common ingredients in many ladoos. The proportion of the ingredients and cooking style gives each ladoo its distinct taste and texture. Castor sugar, sugar syrup or jaggery are the sweetening agents and ghee (clarified butter) the fattening agent used in most ladoos.  In the age of ready to eat food, a variety of ladoos are still regularly rolled in Maharashtrian households throughout the year.  Here is just a small sampling of must-try ladoos during Maharashtrian festivals.

1. Motichur ladoo: Soft to semi soft, these ladoos are mostly made commercially due to complex preparation. Gram flour batter droplets are deep fried in ghee, soaked in sugar syrup and then rolled.

3. Besan ladoo: Even though besan ladoos are must on festive days they are regularly made at home. These ladoos are rich and heavy, made by roasting coarse gram flour in pure ghee and adding castor sugar. Flavored with cardamom and raisins, these ladoos are soft and just melt in the mouth.

4. Rava Besan ladoo:  Combination of rava (semolina) and coarse besan (gram flour) the preparation is similar to rava ladoo using sugar syrup. This ladoo has a great significance as an offering on the thirteenth day ritual of a deceased person.

5. Til (sesame) ladoo : These are small ladoos made especially for Sankranti festival in the month of January. Til ladoos are made with til (sesame seeds) and sugar /jaggery or combination of both. There are two variations - one is hard and in the second variety peanut powder is added which makes them soft.

6. Ladoos for fasting days: Like all other occasions specific ladoos made with Rajgira and Sabudana are eaten on the days of fasts in Maharashtra.

7. Rajgira (Amaranth) ladoo: These crunchy ladoos are a combination of rajgira and special jaggery with a hint of peanuts. An ideal supplement to fight anemia, these ladoos are hardly made at home and are available in every grocery store. 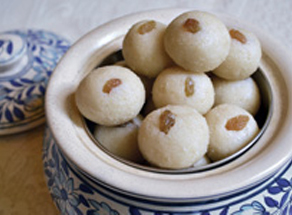 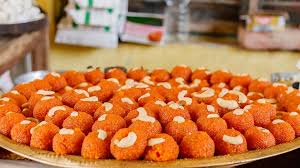 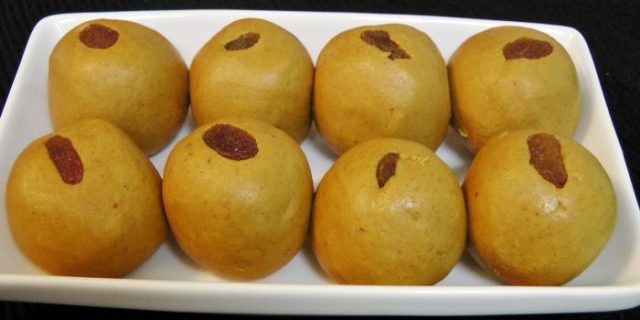