Ganesh Chaturthi is the most important festival in Maharashtra. It is celebrated for ten days with huge fun fare.


One of the most popular deities in India, Lord Ganesh is a symbol of wisdom and good luck. It is said that his elephant head epitomises everything related to wisdom - small shrewd eyes, large ears that miss nothing, a long nose that can smell out anything and his vehicle, a mouse, reflects how much importance a wise man gives to the smallest of the life forms. Displayed at gateways and on doors, either by visuals or symbols, generally facing the rising sun in the East, Ganesh (or Ganapati) is revered across India as Vighnaharta, the one who removes obstacles.

Vinayak Chaturthi, in the Hindu month of Bhadrapada, is the festival of Ganesh. Also called Vinayagar in Tamil Nadu, the son of Shiva and Parvathi, he is believed to bestow his presence on the earth for all his devotees during this festival. It is said that this is the day when Shiva declared his son, Ganesh, superior to all gods. The Ganesh Festival in Maharashtra is coupled with Gauri Poojan, which is the worship of Goddess Lakshmi. It is believed that this is when the two sisters of Ganesh, Jyeshtha and Kanishtha (elder and younger one), come to meet their dear brother.

The festival is celebrated throughout Maharashtra in almost every household at an individual level, as well as together, at the community level. It begins with the installation of an idol of Lord Ganesh. In the days that follow, the idol is worshipped daily by family members along with their relatives, friends and neighbours who come to have darshan of the Lord. At the community level, huge pandals are set up by entire neighbourhoods and a larger than life idol of Ganesh is installed, which is worshipped by the entire community with great pomp and show.  On the tenth day, a procession of the idol is taken right from the home to the nearest water body, amidst the chanting of the phrase, “Ganapati Bappa Moraya”. All the way, devotees dance to the sound of drumbeats and play with gulal (dry red colour). The procession comes to an end with the immersion of the idol, again amidst louder chanting with a request to the Lord to come back next year.

According to the historian V.K. Rajwade, the earliest Ganesh Festival celebrations can be traced back to the reign of the Satavahana, Rashtrakuta and Chalukya dynasties. Centuries later, Lord Ganapati was the family deity of the Peshwas.  Historical records show that citizens of all religions, castes and communities in Pune attended a great five day festival, recognized as a great cultural meet across India. Nanasaheb Peshwe gave grandeur to this festival and made it a public celebration.

In 1893, Indian freedom fighter and social reformist, Lokmanya Bal Gangadhar Tilak, transformed this annual domestic festival in Maharashtra into a large public event. Tilak recognized the wide appeal of the deity as the 'God For Everybody' and popularized the festival in order to bridge the gap between the various castes and religions and find a context to unify them. He used this festival as a tool to generate a nationalistic fervour among people in Maharashtra against the British colonial rule. Tilak encouraged the installation of large images of Ganesh in public pavilions and established the practice of immersing, via processions, those idols in rivers, the sea or other pools of water on the tenth day of the festival (on Anant Chaturdashi), a tradition that continues unbroken till date. 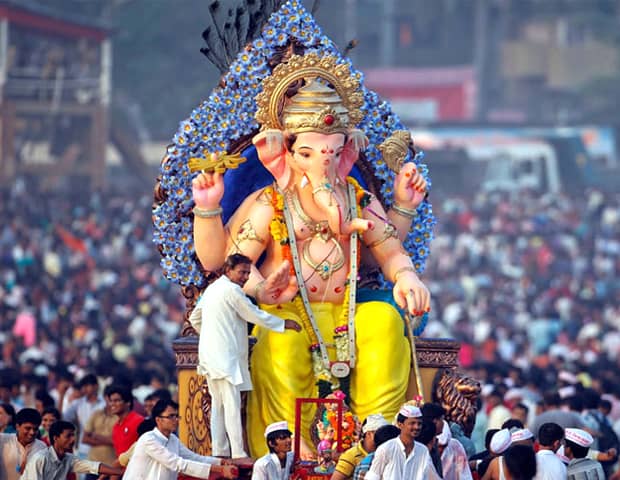