The full moon shines brightly in the sky, making the smaller stars almost invisible due to its brightness. The air is cold, and thousands of devotees have lit oil lamps in temples and along river ghats to light up the night. It is Tripuri Pournima, the Hindu calendar's fifteenth lunar day in the month of Kartik, and the second most important Shiva festival after Shivratri.


Kartik is regarded as the most sacred month in the Hindu calendar, surpassing all others. On Tripuri Pournima, fairs and rituals that began on Prabodhini Ekadashi, the eleventh lunar day of the same month, come to an end.

Tripuri Pournima, the last day of the Tulsi Vivah, or Tulsi wedding, brings an end to all of these rites. Lord Vishnu and Tulsi, a personification of the Tulsi or holy basil plant, also known as Vrinda, have a historical tradition in Maharashtra of commemorating their wedding. Many houses will be commemorating the heavenly wedding customs this evening.

Tripuri Pournima is thought to be the time when Lord Vishnu reincarnated as Matsya, or fish, and saved Manu, the first man, from the flood. Lord Krishna and Radha, his beloved, are said to have performed raas, a type of dance, on this day, and Lord Krishna worshipped Radha. Tripuri Pournima is also known as Raas Pournima because of this.

The Tripuri Pournima festival also falls on Guru Nanak's birthday and corresponds with the Jain festival of illumination. For Jains, it is a particularly auspicious and religious day. Lord Mahavir, the twenty-fourth Teerthankar, attained nirvana on this day. In his honour, Jain devotees study sacred literature and have their homes and houses illuminated.

According to a popular tale related with Tripuri Pournima, Shiva killed the demon in his form as Tripurantaka (the killer of Tripurasura) on this day. Tripurasura, a demon, had worshipped Lord Brahma and earned immense abilities from him. Tripurasura soon became conceited about his unrivalled might and began disturbing the inhabitants of all three planets. He grew completely out of control.

When he inquired about the purpose for the prayers, the gods told that the demon Tripurasura was causing him trouble. He had defeated the gods and conquered the entire planet. He'd also built three cities in space, collectively known as 'Tripur.'
The gods were promised by Lord Shiva that he would deliver them from the monster. On Kartik Pournima, Shiva used his almighty abilities to battle the demon, destroying all of his towns with a single arrow, and finally defeating Tripurasura. The Gods were thrilled with the conquering, and they held a festival with illuminations to commemorate the occasion.

As a result, this day is known as 'Dev-Diwali,' or 'Diwali of the Gods.' On Tripuri Pournima, the temples of Lord Shiva are illuminated to honour this tremendous triumph.

Early in the morning, people take a sacred bath and draw magnificent rangolis in front of the main doorways.
Devotees sing prayers in the Shiva temples, which are crowded. The sound of mridangas and cymbals may be heard all day.
Many devotees bathe in a sacred lake or river, known as a Kartik Sthan, during Tripuri Pournima. Taking a holy dip in the Ganges in Varanasi on this day is regarded one of the most auspicious.

Similarly, on Tripuri Pournima in Maharashtra, people flock to the rivers Godavari, Krishna, and Chandrabhaga in great numbers. On the day of Tripuri Pournima, it is believed that the gods descend to earth and take up residence in the sacred rivers. At the Ganges and other sacred rivers, elaborate ceremonies are held on this day, it is said that anyone who bathes in the sacred waters can cleanse themselves of negative energies and get blessings from all the gods of the skies.

Throughout the night, the temple grounds are illuminated by dazzling lights. In temples, deepmalas, or lamp towers, are lit.It is, without a doubt, a visual feast. To achieve Moksha, people light 360 or 720 candles in temples (freedom from cycle of birth and death). The number 720 represents the Hindu calendar's 360 days and nights.

Thousands of earthen lanterns light up the ghats of the Godavari in Nashik, the Krishna in Vai, and the Chandrabhaga in Pandharpur in Maharashtra.Priests are given lamps on this day. In households and Shiva temples, the lamps are kept lit all night. In river streams, lights are also floatated. Under the Tulsi, Sacred fig, and Amla trees, oil lights are lit.  As a result, this day is also known as 'Kartik Deeparatna' - the month of Kartik's gem of lamps.

One may or may not believe in the legends and rituals that have been practised for generations. A view of the ground, with river banks, buildings, and temples illuminated by an equal number of flickering oil lamps, and a gaze at the night sky lit up by the full moon and countless of stars, is absolutely divine. 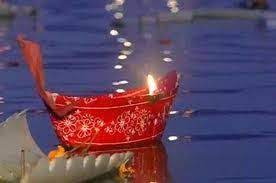 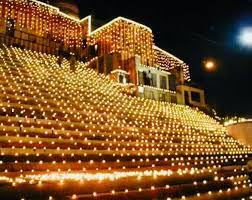 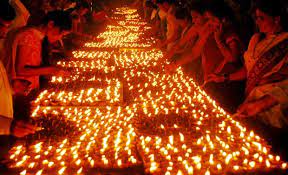 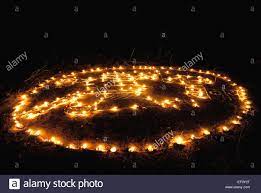 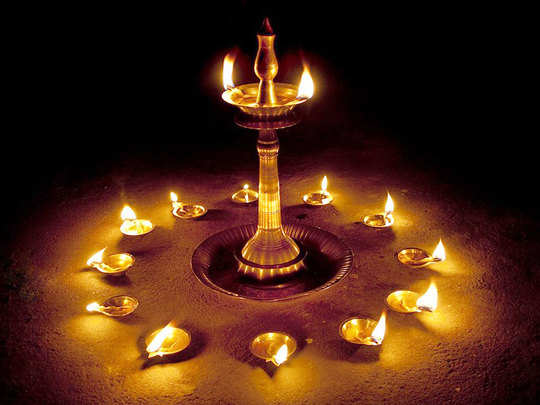