The fort Sindhudurg is on an island off the coast of Malvan town in the Sindhudurg district of the Konkan region of Maharashtra State. This fort is a protected monument by the Central Government of India.

The shape of Malvan beach is a crescent with protruding rocks in the sea. This can be seen as the unique geological feature of this beach. Sindhudurga was built by ChhatrapatiShivajiMaharaj, the founder of the Maratha Empire. The fort is on a moderate rock that is not far from the Malvan coast. The fort is known for being the coastal capital of the Maratha Empire and a major Naval base during the time of ShivajiMaharaj. The rampart walls of the fort arising from the sea is a unique and surprising feature here. The height and width of the fort walls offer grandeur to the fort structure. The entrance gate of this fort is in the North-East direction. It is believed that this fort was once full of buildings, but now it is merely a shell with nothing inside except a few small temples. To the Marathas, Sindhudurg is Shivaji's cenotaph, and in its main temple, ShivajiMaharaj's image is worshipped. The hand and feet prints of ChhatrapatiShivajiMaharaj are kept at the temple in reverence and protected by small domes. The fort has few water tanks which provide drinking water.
Realising the importance of the navy in the Arabian sea and coastal security, ChhatrapatiShivajiMaharaj wanted to have a strong fort in Konkan Area. After various unsuccessful attempts to conquer Janjira of Siddhis near Murud, he planned for this sea jewel, known as Sindhudurga around 1665. Apart from the main fort of Sindhudurga on the larger island, ShivajiMaharaj fortified the smaller island with a small fort Padmagad to protect the main fort. On the mainland opposite the town and at the mouth of the creek about a mile and a half north, built the forts of RajkotandSarjekot.

Sindhudurg Fort is located on an island with the Arabian Sea in the West, the Malvan Coast in the East about 1.5 KM away.

There are three temples on the fort namely Jari Mari Temple, ShriBhavani Temple and Shri Shiv Rajeshwar Temple. In Shri Shiv Rajeshwar Temple, ChhatrapatiShivajiMaharaj is worshipped as a deity. This Temple is a popular tourist attraction amongst the people. There is also a beach on the North-Western part of the fort. There is a domical structure that houses the footprint and the hand impression of ChhatrapatiShivajiMaharaj. 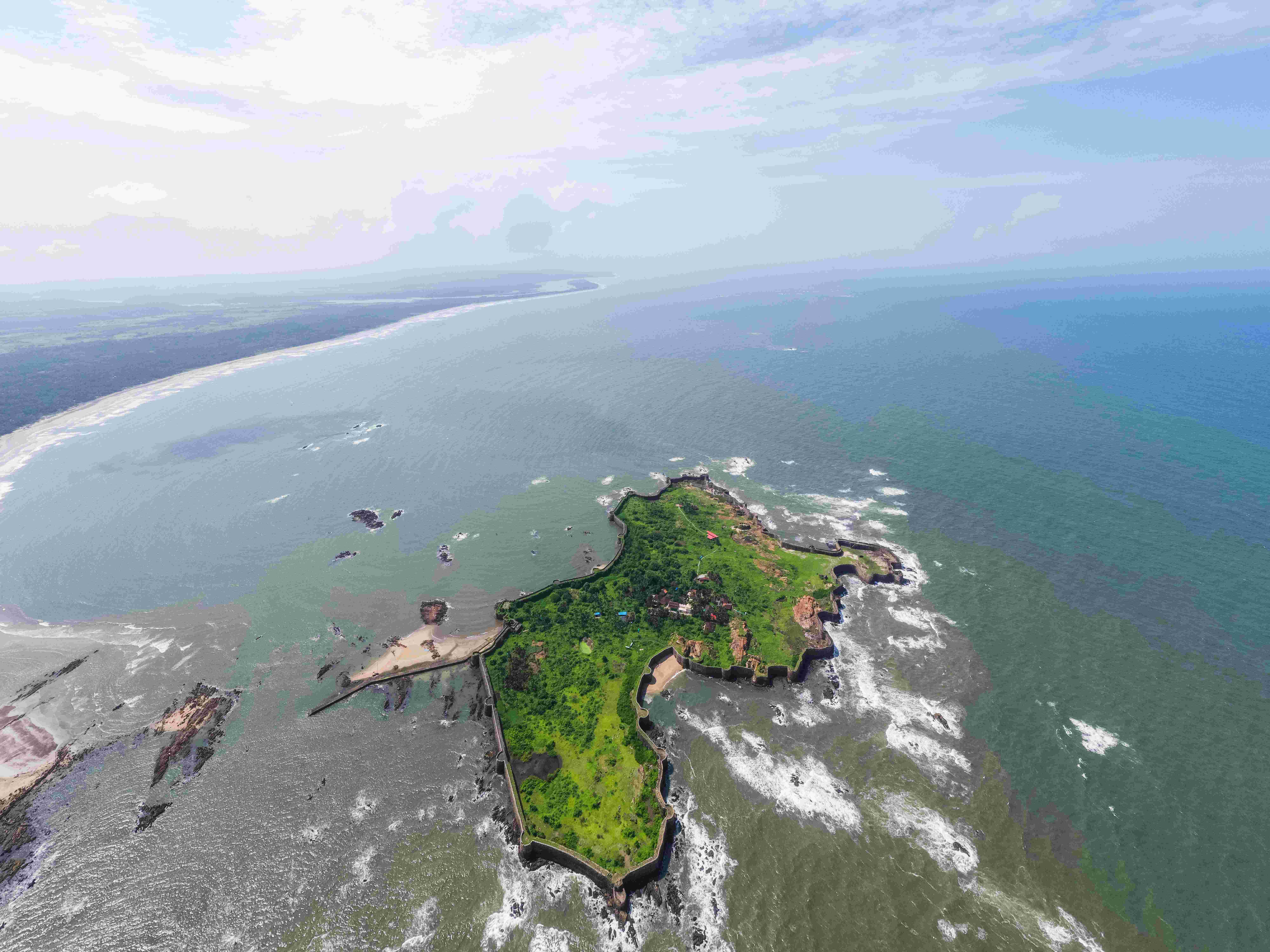 Located in the Malvan taluka, Sindhudurg is one of the excellent sea forts in Maharashtra whose construction was started in 1664 and completed in 1667. 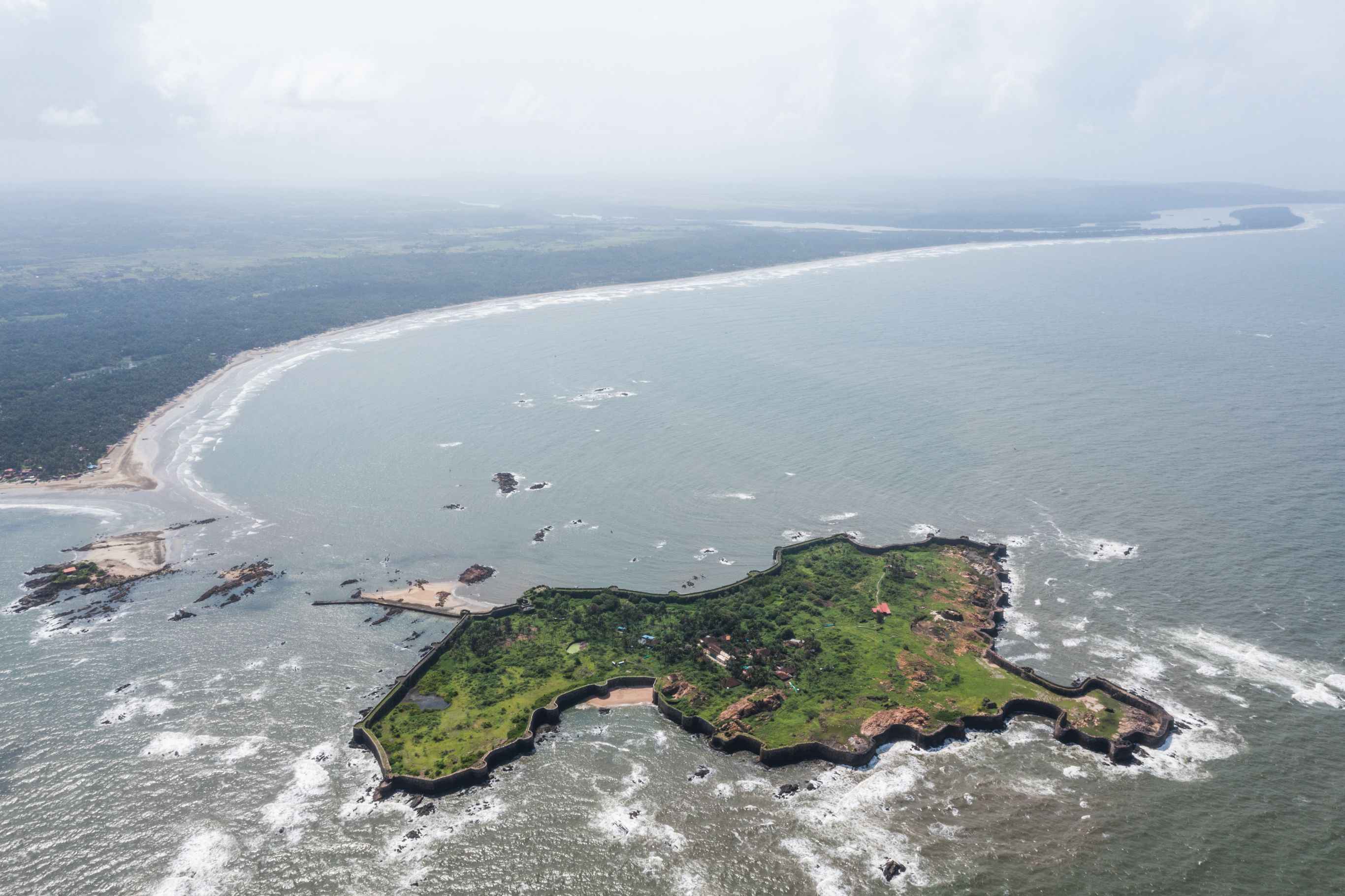 Apart from the beauty and historical value of this fort, the surrounding landscape in itself is a tourist’s delight with several options for adventure too.

The Mumbai-Goa road leads you right through the heart of Sindhudurg. The pace of the drive is more than made up for by the views you get. From Pune, the drive is a bit quicker via Kolhapur, where you should turn onto the Mumbai-Goa Hightway via Gaganbavda towards Sindhudurg.

Nearest railheads are Kudal and Kanakavali which are 32 km from Malvan.

Nearest airport is at Ratnagiri (134 km).

Konkan
Malvani cuisine is the standard fare of the Konkan region of Maharashtra and Goa, and some northern parts of West Karnataka. Although Malvani cuisine is predominantly non-vegetarian, there are many vegetarian delicacies too.

Kunkeshwar
Visit Kunkeshwar known for its temple of Lord Shiva. Considered a very holy place, it is also referred to by pilgrims as ‘Konkan Kashi’. The town of Kunkeshwar is built along the sea and is known for its produce of mangoes.


Visit Kunkeshwar known for its temple of Lord Shiva. Considered a very holy place, it is also referred to by pilgrims as ‘Konkan Kashi’. The town of Kunkeshwar is built along the sea and is known for its produce of mangoes.

Hotel Ratna Palace, believes in the luxury of simplicity. Informality, style, warmth and modernity in its approach to service philosophy and affordability in pricing are what it makes the hotel value for money.